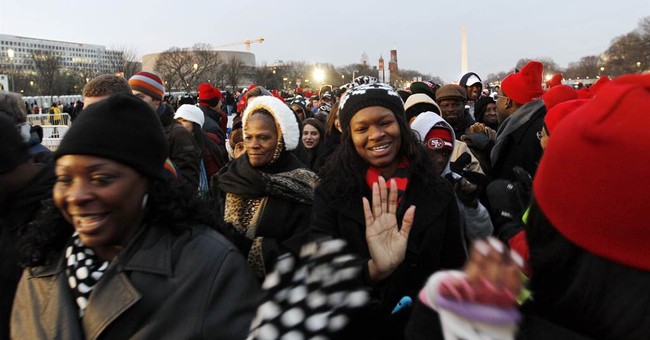 Black female voters were a key Hillary Clinton constituency. They formed the core of her supporters. It makes sense; these are some of the most reliable and politically active voters in the Democratic base. Yet, are they leaving the party? Patrice Lee Onwuka of the Independent Women’s Forum broke down the third annual Power of the Sister Vote survey and found some troubling signs for Democrats. For starters, one in five say that the Democratic Party doesn’t best represent them, while there’s been an 11-point drop in black female voters who think the Democrats represent their best interests. Maybe the base is cracking, as Onwuka suggests:

The 3rd annual Power of the Sister Vote conducted by Essence and The Black Women’s Roundtable found an 11-percent drop in black female voters (from 85 to 74 percent over one year), who believe the Democratic Party best represents their interests. Additionally, more than one in five black women don’t think either party best represents them — an eight-point increase from last year.

This is not the first signal of trouble from a constituency that has been the party’s most loyal voters.

According to a survey presented to the Congressional Black Caucus earlier this year, 63 percent of black Americans feel taken for granted by the Democratic Party. That sentiment is strongest among black women ages 50-plus, who have watched decades of black communities and important issues go ignored.

This year, more than two dozen black female activists and elected officials penned an open letter to Democratic National Committee chairman Tom Perez warning against the party’s nonchalant attitude toward black women: “The Democratic Party has a real problem…The Party’s foundation has a growing crack and if it is not addressed quickly, the Party will fall even further behind and ultimately fail in its quest to strengthen its political prospects.”

Black women are highly politically active and civically engaged in their communities. The Sister Vote poll found that 98 percent of respondents were registered voters and a majority (61 percent) is active in their communities. In the 2008 and 2012 presidential elections, black women voted at higher rates than all other race and gender groups.

If true, this is a huge wake-up call. Besides, rebuilding the state party apparatuses that have withered away, reaching out to working class voters, getting fundraising back on track, finding a new leader, crafting a new message, and drafting a fresh agenda that resonates, Democrats have to shore up things with their black constituent base. Oh, and before all of that—there’s a massive disagreement between the progressive and establishment wings on how to fix everything from fundraising to agenda setting. It’s nasty. It’s not cordial. The Bernie Sanders wing of the Democratic Party is desperate to drag it further to the left, which some have mentioned could lead to more electoral disasters in the future. You can’t win with just the cities and you’re not going to win back white working class voters and be competitive in rural America if only hard left-wingers of the San Francisco mold are the only candidates that are acceptable. Yeah, the GOP may have its issues, but they’re quite minor when you consider the renovation project the Democrats need to undertake.