Las Vegas Shooting Survivor On Trump, First Lady: They're Real People Who Care And Have A Heart 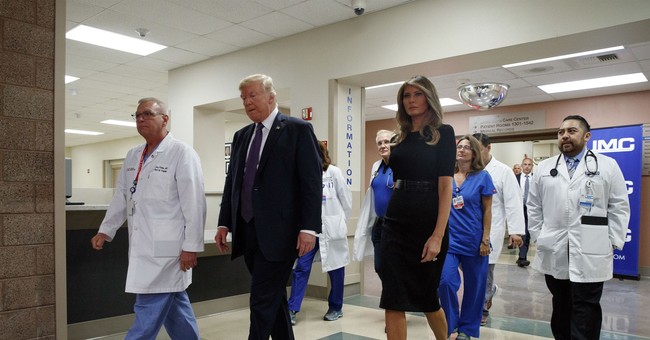 It’s there in The New York Times: “With Las Vegas Shooting Victims, Trump Assumes Role of Consoler in Chief.” Now, this honeymoon period in the press may fade, but at least there’s some tacit acknowledgment that this man isn’t the Antichrist. Trump has been handling this tragedy well, issuing a poignant statement over this shooting, and meeting with the victims of the shooting yesterday. Christine wrote about one victim, Thomas Gunderson, who while injured, muscled the strength to stand as the president and First Lady Melania Trump entered his room.

Now, Stephanie Melanson, another survivor of the shooting, commented that the Trumps were “real people,” that they cared, and that they have a heart. Her mother, Rosemarie, was shot in the abdomen during the attack. She explained on CNN today (via the Hill):

Stephanie Melanson, a survivor of the Las Vegas mass shooting, said President Trump and first lady Melania Trump are "real people," recalling their visit to the hospital after her mother was wounded in the attack.

The concert was a Mother's Day gift to Rosemarie Melanson from her daughters. She has undergone two surgeries for her injuries at Sunrise Hospital in Las Vegas, where a number of the shooting's victims were taken. She is expected to recover.

The Melanson family is one of hundreds who were victims of Stephen Paddock’s senseless attack. For some, those wounds may never heal, as he took 58 lives and wounded close to 500 more when he opened fire. The 64-year-old used his 32nd floor suite at the Mandalay Bay hotel, which overlooked the venue for the Route 91Harvest music festival below. He fired for a little over nine minutes. He had brought 23 firearms with him. Paddock killed himself before authorities breached the door to his hotel room.