Want To Take A Wild Guess On What The Senate Intel Committee’s Update On Russia Was Today? 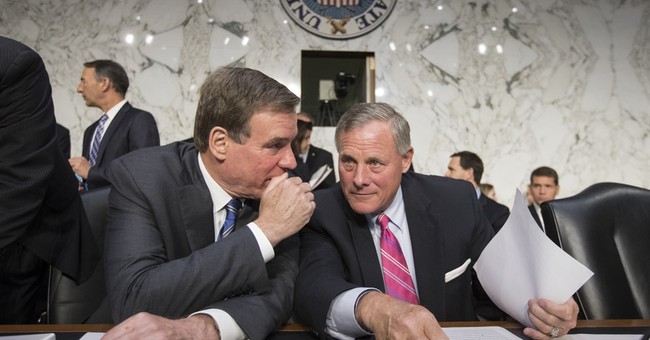 Sen. Richard Burr (R-NC), chairman of the Senate Intelligence Committee, and Sen. Mark Warner (D-VA), the vice chair, held a press conference and offered an update on the investigation into Russian meddling. If you could take a wild guess about what the update would be and picked a whole lot of nothing, then you would be correct. All we know is that they don’t have any conclusions about their investigation into Russian activities, that their staff is working really, really, hard, and that the debunked Russian dossier has run its course. They can’t get any more meaningful information on the latter, with Burr saying they’ve hit the wall.

Burr added that they’ve interviewed every Obama official involved on what they did and didn’t do. They’ve also interviewed other people from around the world. He added that it’s safe to say the inquiry has expanded due to new leads and information. The volume of work is still immense, so no definite conclusions have been reached on this subject. He also said that the committee trusts the conclusion of the intelligence community that the Russians meddled in our election.

On the firing of James Comey, Burr was adamant that such questions should be directed to the Department of Justice and special counsel Robert Mueller. It’s not something that they’ve closed the books on, but the committee has exhausted every person who has information on this matter.

The committee will continue to look into collusion—and shocker—no conclusions on that front either. They’ve collected over 250 hours of interviews, with 25 more scheduled as of today. Burr added that what they can discern is that the Russian intelligence service is determined, clever, and that every campaign and election official should take this into account as we head into the 2018 elections.

Vice chair Mark Warner also said that the committee still has strains and threads that they need to pursue, but added that Russian efforts did not end on Election Day 2016. They’ve targeted other elections in Europe and we need to be on guard.

He added that 21 states’ electoral systems were not penetrated, but at least had a knock on the door. He questions why it took 11 months for the DHS to reveal that information, despite the DHS cyber division head stating exactly that in June.

Concerning social media, Warner said there’s been an over 700 percent increase in the use of digital political advertising between 2012-2016. The committee is concerned about Russian use of social media platforms. Google, Twitter, and Facebook and been invited for a public hearing to further discuss this matter.

Is this a joke? Do we really believe that 3,000 Facebook ads upended our Madisonian experiment? Three thousand Facebook ads destroyed American elections; give me a break. It’s not hard to see some in government take the road that the Internet needs to be monitored and censored. Not to mention the hypocrisy of it all. Do you really think we’ve never meddled in elections? Spoiler: we have—many times. Hacking and cyber warfare are just another front in 21st century war and espionage. Doesn’t mean we should guard against it or do nothing about it, but to use it as a crutch to explain why Hillary Clinton lost to Donald Trump, which what many Democrats are doing, is just absurd. There is still no evidence that Russian officials colluded with the Trump campaign, which is the Holy Grail for the Left. In the meantime, the rest of the country has moved on; no one cares about this.