Fox Sports Hosts To Ex-Army Ranger: You Should Have Waited With The Team and Not Honored National Anthem 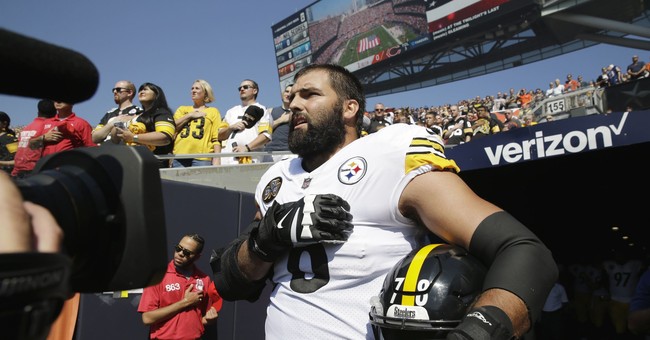 Pittsburgh Steelers offensive tackle Alejandro Villanueva is a former Army Ranger. While his team remained off the field for the national anthem, he stood by the tunnel with his hand over his heart. As the weekend descended into madness from the liberal media over President Trump’s remarks about NFL players who take a knee during the Star-Spangled Banner, Villanueva proved to be Sunday’s hero. Yet, Pittsburgh coach Mike Tomlin, who defended his team’s actions to remain off the field as avoiding playing politics, was disappointed the former Army Ranger visibly stood for the anthem.

“Like I said, I was looking for 100 percent participation, we were gonna be respectful of our football team,” said Tomlin. Guy torched him:

Let me see if I've got this straight: Tomlin -- a Clinton donor and fundraiser -- is upset that Villanueva was not "respectful of our football team" because he decided to honor the country for which he's courageously risked his life by not snubbing the national anthem?  This is the display of 'disunity' that bothers Tomlin?

Now, Fox Sports 1’s Skip Bayless and Shannon Sharpe joined Tomlin, noting that Villanueva should have remained out of sight (via Mediaite) [emphasis mine]:

“It didn’t work for him to step out of the tunnel,” Bayless said during Monday’s edition of Undisputed. “If, in fact, you had all agreed, you had voted whether a majority or unanimously, to do this as a team to stay up in the tunnel until the Anthem was done. And Mike Tomlin was clear.”

“Teams, they always take the military mentality, because it’s all for one, one for all. Whatever we decide to do that’s what we’re going to do. He went on his own. I get it. He was in the military. I commend him for his service. But in this situation if the team decided that we, all of us, were going to wait in the tunnel while the national anthem is being played, that was the protocol that should have been followed.”

The thing is no one in that universe gets it. No one. We can talk about free speech all day; the point is that 72 percent of Americans view Colin Kaepernick, who started this whole controversy in San Francisco, and his national anthem antics as unpatriotic. There’s a massive disconnect between the fans and the league. Americans are proud. They respect those who serve and when people take a knee, they see spit flying in the faces of those who have sacrificed to protect our freedoms here at home. There’s no changing that. If you have to explain, you’re losing. Sometimes it’s just wrong. And huddling in the tunnel like the Brits during the Blitz because no one could agree on something as simple as respecting and standing for the national anthem is just absurd. Maybe that’s why Villanueva merchandise is going through the roof. For the bubble, this stunt didn’t work, for everyone else—there was an American hero honoring our country. No one should be fired or suspended for taking a knee of course. They do deserve a kick in the teeth on social media, which was expected, and they shouldn’t expect the intensity to subside.