Oh My: NYC Mayor Pretty Much Comes Out Against Private Property 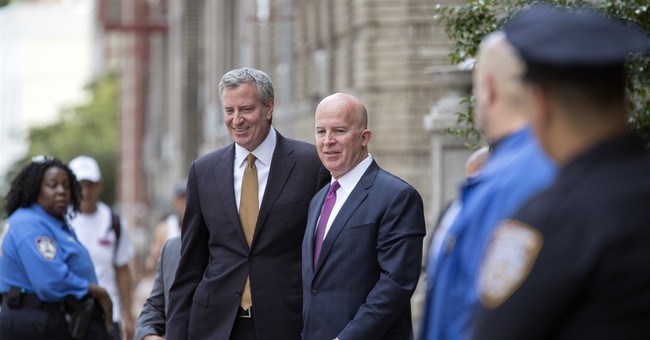 When it comes to the progressive Left, there are figures like Sens. Bernie Sanders (I-VT) and Elizabeth Warren (D-MA). Yet, at a more local level, you cannot ignore New York City Mayor Bill de Blasio, who is running for a second term this year.

The mayor has been at the center of controversy, however, especially when it comes to the city’s law enforcement community. Over the summer, NYPD Officer Miosotis Familia was shot and killed while sitting in her RV-style command post during the Fourth of July weekend by Alexander Bonds who was later shot and killed by police. As the city mourned the loss of one of New York’s finest, de Blasio decided to abscond to Germany to address an anti-Trump protest at the G-20 Summit. De Blasio said that the Germans paid for the trip, and that it was planned weeks in advance, but he only told the press pretty much around the time he was boarding. The mayor’s absence also led to him skipping the swearing in of 524 new officers. It was unseemly and Fox News’ torched the mayor at the time, calling him a “horrible, little man child.”

In July, a local woman, Vickie Paladino, ran up to the mayor to scream at him, asking why he was letting the NYPD down while de Blasio was attending an infrastructure unveiling ceremony; de Blasio ran away.

Yet, while Sanders and Warren are pretty far left, de Blasio stands out for his apparent opposition to private property. The mayor made these opinions known in an interview with New York Magazine. Oh, and his beef with New York Governor Andrew Cuomo was a bit interesting as well. Neither man will endorse each other, especially when it comes to future office [bold text indicates questions from NY Mag]:

Are you open to supporting a progressive challenge to the governor next year?

I’m talking about this year.

Are you open to it?

So I’ll take that as a yes.

No, you shouldn’t take an answer like that as anything. I’m not talking about 2018 right now.

You’re unwilling to commit to endorsing him.

No, I’m literally not willing to talk about 2018 right now. Period. So if you interpret it, that’s not fair to your readers, with all due respect.

Would you vote for him in a presidential primary?

Is he a plausible president?

In 2013, you ran on reducing income inequality. Where has it been hardest to make progress? Wages, housing, schools?

What’s been hardest is the way our legal system is structured to favor private property. I think people all over this city, of every background, would like to have the city government be able to determine which building goes where, how high it will be, who gets to live in it, what the rent will be. I think there’s a socialistic impulse, which I hear every day, in every kind of community, that they would like things to be planned in accordance to their needs. And I would, too. Unfortunately, what stands in the way of that is hundreds of years of history that have elevated property rights and wealth to the point that that’s the reality that calls the tune on a lot of development.

I’ll give you an example. I was down one day on Varick Street, somewhere close to Canal, and there was a big sign out front of a new condo saying, “Units start at $2 million.” And that just drives people stark raving mad in this city, because that kind of development is clearly not for everyday people. It’s almost like it’s being flaunted. Look, if I had my druthers, the city government would determine every single plot of land, how development would proceed. And there would be very stringent requirements around income levels and rents. That’s a world I’d love to see, and I think what we have, in this city at least, are people who would love to have the New Deal back, on one level. They’d love to have a very, very powerful government, including a federal government, involved in directly addressing their day-to-day reality.

As indicated above, the question about income inequality was prompted by a December report from the Manhattan Institute, which indicated that the income disparity had increased under de Blasio. Oh, just as de Blasio won’t commit to endorsing Cuomo for president or another term as governor—New York has no term limits for the latter—Cuomo won’t endorse de Blasio for mayor because he doesn’t really live in New York City proper (via NY Post):

“I don’t vote in the primary election. I’m a Westchester resident,” Cuomo, whose home is in New Castle, told reporters at the West Indian-American Day Parade.

“I’m not voting in this election, so I don’t have any primary endorsements at this time.”

But his excuse doesn’t hold water.

Cuomo has endorsed several City Council candidates in the primary, including Francisco Moya against ex-con Hiram Monserrate in Queens.

The Democratic primary is Sept. 12, and de Blasio is heavily favored to defeat his challengers, including ex-Councilman Sal Albanese.

Asked about Cuomo’s comments, Monica Klein, a spokeswoman for the mayor, simply said, “We didn’t ask for his support.”

Now, de Blasio is term-limited should he successfully earn another term as mayor in the fall, but he could be eyeing the White House in which case I say Heaven help us.