RUN! Senate Democrats Head For The Hills When Asked About Menendez Corruption Fiasco 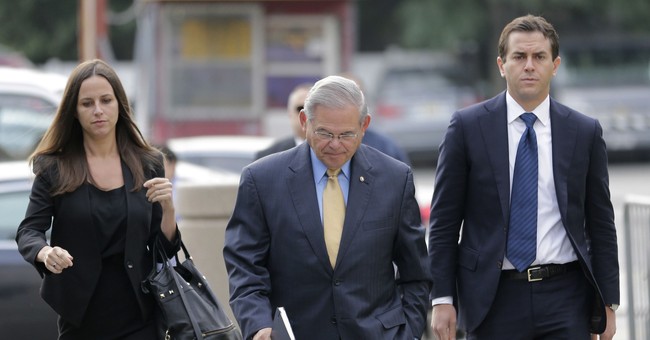 Well, besides Hillary Clinton, there’s another person Democrats do not really want to talk about: Sen. Bob Menendez (D-NJ). The New Jersey Democrat is on trial for a slew of corruption charges stemming from his relationship to his friend Dr. Salomon Melgen (via Politico):

The charges all relate to Menendez taking hundreds of thousands of dollars in gifts in exchange for Melgen being able to use the senator’s office to help him. With the 2018 season about to begin, Clinton's book about to reopen raw wounds from the 2016 season—Democrats are running for the hills concerning commenting on this trial that could net the GOP an extra vote in the Senate, albeit for a short while, should Menendez be convicted of the charges. From Sens. Chuck Schumer (D-NY), Jon Tester (D-MT), Debbie Stabenow (D-MI), Joe Manchin (D-WV), Ben Cardin (D-MD), and Democratic New Jersey gubernatorial candidate Phil Murphy—all want nothing to do with this trial, saying they haven’t been following the trial or declining to comment outright. The nightmare scenario is that Menendez is convicted and refuses to resign his seat (via CNN):

His fellow Democrats are eager to avoid the subject of Menendez's bribery trial, hoping that he is exonerated and then he can focus on his 2018 reelection battle in the Garden State.

But there is fear inside Democratic circles that Menendez may get convicted and refuse to give up his seat, facing pressure to resign or an expulsion vote in the Senate. If the Democrat were to step aside while Gov. Chris Christie remains office, the Republican would pick a replacement.

Yet if Menendez's legal problems worsen and he decides to run for reelection, it could jeopardize a key seat in a critical election year.

Senate Minority Leader Chuck Schumer on Wednesday declined to say if he would stand by Menendez if he's convicted. Instead, Schumer said simply that the New Jersey politician is putting up a "spirited defense" and deserves to be presumed innocent until proven guilty.

"We are a country of laws," said Sen. Joe Manchin, a Democrat from the red state of West Virginia, who faces reelection next year. "And I think people should just let this process go through before they come to judgment in any way shape or form."

Asked if he'd continue to stand by Menendez if he were convicted, Manchin declined to say, adding: "Whatever the verdict is we'll deal with it at that time."

Sen. Jon Tester, the Montana Democrat who also faces voters next year, also declined to comment, saying his attention has been focused on wildfires in his state.

"I haven't really been paying attention to the trial," Tester said.

Menendez’s defense team is also off to a rocky start, with the judge rebuking the motion to alter the trial schedule so that the New Jersey Democrat could vote. Judge William H. Walls said that Menendez’s job is no different than that of a cab driver, which the defense took issue with in the days leading up to the trial. Judge Walls straight up told Menendez’s lawyer to “shut up” on Wednesday, with the legal team saying that the corruption trial is an attack on Hispanics.

Senate Dems hope the Menendez trial goes away quickly - and several won't say yet if he should go if convicted https://t.co/97OeOqWT9E