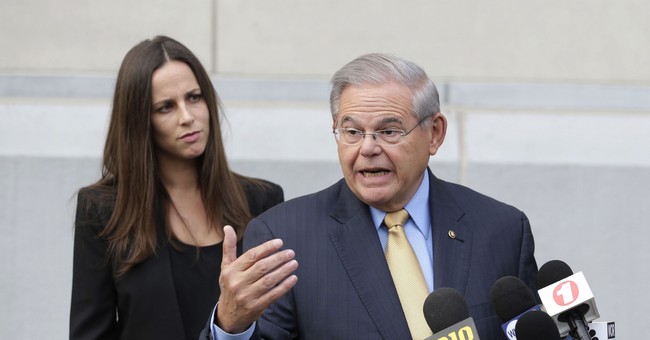 UPDATE: Liberal lawyer Alan Dershowitz says the defense focusing on ethnic discrimination is a mistake. "I don't see the evidence to back that up," he said.

Well, Wednesday was Sen. Bob Menendez’s (D-NJ) first day in court for his corruption trial that is rather underreported by the news media. I mean that’s no surprise, Bob is a Democrat and the country simply cannot be told that should he be convicted of these charges, the GOP has a chance of picking up an extra vote, albeit for a short while, in the Senate. Yet, Democrats know this, which is why they’re most definitely going to stonewall, obstruct, or play dumb should Menendez be sentenced to jail time. So, what’s he being charged for again (via Politico):

Melgen has already been convicted in a multimillion-dollar Medicare fraud case in Florida and is awaiting sentencing.

Menendez’s legal team tried to adjust the trial dates, so Bob could cast votes. The judge, William H. Walls, denied the request, noting that Menendez’s job, while prestigious, is no more important than a cab driver (via Roll Call):

The Court will not serve as concierge to any party or lawyer. Defendant Menendez claims that he is in a ‘unique situation’ because his voting duties are ‘on a schedule not of his own making,’” Senior Judge William H. Walls wrote in his opinion. “But so are the duties of the radio repairman, the cab driver, and the businessman. Yet none would claim the right to dictate the schedule of their own criminal trial. Menendez is given the same choice as any other criminal defendant.”

On Wednesday morning, the judge and Menendez’s lawyer got into an exchange that culminated with Walls telling the senator’s counsel to “shut up.” Menendez’s attorney, Raymond Brown, took umbrage at Judge Wall’s language in the decision to not alter the trial schedule for votes. So, now here’s the final ploy: this whole corruption scandal against Menendez and Melgen is anti-Hispanic (via Philadelphia Inquirer) [emphasis mine]:

It’s not going to be a tabloid trial,” U.S. District Judge William H. Walls said after temporarily excusing the jury. “I’m not just going to let you swish and swash nonsensical scenarios that really don’t even make for a good pulp fiction story.”

The tone the judge set for the trial could bode well for Menendez, a New Jersey Democrat, because prosecutors have argued that the sumptuous gifts Menendez received from a Florida eye doctor prove the defendants’ corrupt intent.

Also Thursday, an attorney for ophthalmologist Salomon Melgen used his opening statement to show photos of his client and Menendez spending time together at the doctor’s house in the Dominican Republic. Menendez has visited Melgen’s house in Casa de Campo 25 times since 1998, well before the alleged bribery conspiracy began in 2006, attorney Kirk Ogrosky said.

“There it is, there’s the microwave and the toaster,” Ogrosky said as he showed photos to jurors and described the two men’s friendship. “This is a family home. See the pictures? This isn’t a resort. Here’s the kids’ room. Here’s the back deck with the table.”

The defense attorney also described the government’s case as an “attack” on Hispanic-Americans.

MSNBC’s Ari Melber seemed to be etching Menendez’s epitaph, noting that the evidence against the New Jersey Democrat just doesn’t look close, but also overwhelming. Menendez says he started his career in public life fighting corruption and that he will be vindicated once all of the acts are presented, Melber added (via Free Beacon):

"We don't know what will happen and if he'll be vindicated," Melber said. "But if a politician can take the kind of gifts that Menendez already has taken and be acquitted, then you have to ask if there's something wrong with all of these corruption laws in the first place."

Yet, it seems Hillary Clinton syndrome has afflicted members of the Democratic Party, and by that—I mean the inability to take responsibility. Rep. Debbie Wasserman Schultz (D-FL) says that the investigation into one of her IT aides, who is accused of bank fraud, was anti-Muslim. The IT staffer is of that faith. Former Rep. Corinne Brown (D-FL) said the DOJ investigation into a scholarship fund that she was using as a personal slush fund was racist. And who can leave out Jane Sanders’ federal bank fraud investigation; she called it sexist.  Wassermann Schultz should have fired her IT staffer as soon as he started trouble, she didn’t. Brown shouldn’t has misused donation money, and Sanders didn’t have to embark on a financially ruinous agenda for the now-defunct Burlington College. The loans she received, and the ones she’s being investigated for, drowned the school in debt. And we have Bob Menendez and company who thinks this whole corruption trial is anti-Hispanic.