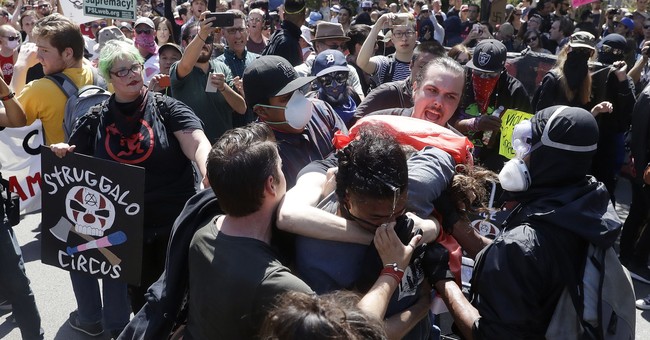 Antifa (“anti-fascists”) groups have entered the limelight. After the horrific chaos that erupted in Charlottesville, Virginia between these far left protesters and white nationalist groups this month, in which scores of people were injured, and one woman, Heather Heyer, was killed, there’s a debate as to which group is worse. White nationalists descended into Thomas Jefferson’s hometown to protest the removal of a Robert E. Lee statue, but it quickly descended into a rumble. Then, in Berkeley, Antifa protesters started to beat up Trump supporters and journalists who were there for the Patriot Prayer rally, which wasn’t a white supremacist gathering. The rally was cancelled, but that didn’t stop Antifa from just beating up people outright because they disagreed with them. Some on social media have argued that Antifa are committing acts of domestic terrorism and now we know that the Department of Homeland Security and the FBI were warning local law enforcement of the group’s activities since early 2016, with the former classifying the violence as acts of domestic terrorism. New Jersey’s Department of Homeland Security has already done so (via Politico [emphasis mine]:

Federal authorities have been warning state and local officials since early 2016 that leftist extremists known as “antifa” had become increasingly confrontational and dangerous, so much so that the Department of Homeland Security formally classified their activities as “domestic terrorist violence,” according to interviews and confidential law enforcement documents obtained by POLITICO.

Since well before the Aug. 12 rally in Charlottesville, Virginia, turned deadly, DHS has been issuing warnings about the growing likelihood of lethal violence between the left-wing anarchists and right-wing white supremacist and nationalist groups.

Previously unreported documents disclose that by April 2016, authorities believed that “anarchist extremists” were the primary instigators of violence at public rallies against a range of targets. They were blamed by authorities for attacks on the police, government and political institutions, along with symbols of “the capitalist system,” racism, social injustice and fascism, according to a confidential 2016 joint intelligence assessment by DHS and the FBI.

After President Donald Trump’s election in November, the antifa activists locked onto another target — his supporters, especially those from white supremacist and nationalist groups suddenly turning out in droves to hail his victory, support crackdowns on immigrants and Muslims and to protest efforts to remove symbols of the Confederacy.

Some of the DHS and FBI intelligence reports began flagging the antifa protesters before the election. In one from last September, portions of which were read to POLITICO, DHS studied “recent violent clashes … at lawfully organized white supremacist” events including a June 2016 rally at the California Capitol in Sacramento organized by the Traditionalist Workers Party and its affiliate, the Golden State Skinheads.

In their April 2016 assessment, the DHS and FBI said the anarchist groups would likely become more lethal if “fascist, nationalist, racist or anti-immigrant parties obtain greater prominence or local political power in the United States, leading to anti-racist violent backlash from anarchist extremists.”

The assessment also said the anarchist groups could become more aggressive if they seek to “retaliate violently to a violent act by a white supremacist extremist or group,” they acquire more powerful weapons or they obtain the financial means to travel abroad and learn more violent tactics.

Several state law enforcement officials said that all of those accelerating factors have come to pass. And recent FBI and DHS reports confirm they are actively monitoring “conduct deemed potentially suspicious and indicative of terrorist activity” by antifa groups

But one of the internal assessments acknowledged several significant “intelligence gaps,” including an inability to penetrate the groups’ “diffuse and decentralized organizational structure,” which made it difficult for law enforcement to identify violent groups and individuals. Authorities also “lack information to identify the travel patterns linking U.S. and foreign anarchist extremists,” the assessment said.

Now, that’s not to say that white nationalist groups are any better. As I’ve said before, these people are the worst of America. They’re both despicable, violent thugs who hold illiberal views of how this country should be. At the same time, they’re more than welcome to make their insane views known. Where it crosses the line is when Antifa and the alt-right decide to recreate Gangs of New York. Yet, Politico couldn’t help, but add a swipe at Trump, quoting law enforcement officials who said, “law enforcement authorities made clear that Trump’s inflammatory rhetoric and policies — first as a candidate and then as president — helped to create a situation that has escalated so quickly and extensively that they do not have a handle on it.”

Right—it’s Trump’s fault that people are punching each other because of deep political disagreements. The far right, white supremacist wing of America is insanely small. It’s not some existential threat to democracy, nor is Trump an actual fascist. It’s an accusation hurled by the Left, much like racism, that has lost all meaning.

It goes to show you that just because Antifa is fighting Nazis, doesn't make them the good guys. They're just as terrible as the people they oppose.