Disgusting: You Won't Believe Why This Woman Is Refusing to Donate to Harvey Victims 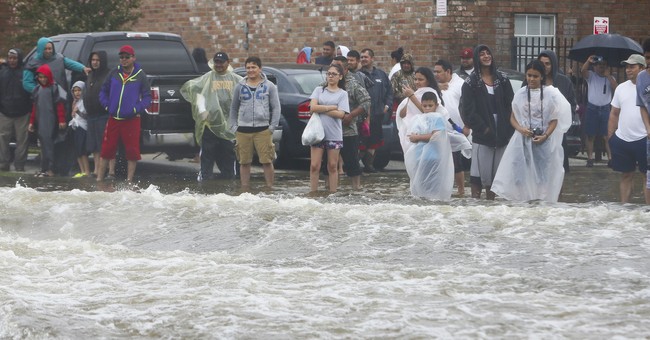 Okay—well, if you want contrarianism, Salon and the Washington Post-affiliated Slate are your go-to places. Hurricane Harvey pummeled Texas’ gulf Coast with wind, rain, and flooding, which has left at least 18 dead. Around 11 trillion gallons of water was poured into the Houston area. Yet, the Louisiana-based Cajun Navy and other good Samaritans joined rescue efforts to saved thousands from the rising waters. It was, as many have said, the very best of America on display after weeks of racially charged ugliness from far right white nationalist groups and illiberal anti-American thuggery from the far left Antifa (anti-fascist) group. Americans helping Americans in times of need; how great one would think, except Slate, who said it was misleading to say this was the very best of America. Right, because now is the time to toss out hot takes like this. It gets worse, though the Slate author had a much better response. Apparently, in their “Dear Mallory” section, one woman is having a massive argument with her girlfriend who refuses to donate money to Harvey victims because some of them might have voted for Trump. Besides the fact that this is an incredibly stupid view, which is why it’s fitting that a liberal would think this, should we remind our mentally challenged brethren, some of which have voiced similar views, and let them know—in a side note fashion—that Houston is actually a Democratic city. Regardless, Slate’s Mallory Ortberg did give a good response to this insanity [emphasis mine]:

Q. That’s not what I had in mind: I come from the Houston area and have been heartbroken about the damage and scenes from Harvey. I decided to donate $250 and asked my girlfriend if she would match it. She agreed, and then when I asked if she had given to the Red Cross or someone else, I learned that she donated to the Humane Society. I know she’s absolutely nuts about animals, especially our own dogs, but to give to animals when people are in trouble seems heartless to me. She’s much more politically active than I am, and I finally asked if she did that to avoid the possibility of giving money to someone who voted for Trump, and she admitted that was one of the reasons. I think that’s awful, and we’ve been fighting about it ever since. She thinks as a gay woman I should see her side, but I just can’t. There are good people everywhere, and she went out of her way to avoid helping. We’ve been fighting about this ever since. Who is right?

A: It took me a few times to parse this letter, because at first I thought your girlfriend was somehow concerned that someone in the Red Cross might have voted for Trump, but it sounds like she is actually reluctant to support human flood victims on the off chance that they may have voted for him, which is nonsensical and unconscionable. “As a society, we should help victims of natural disasters” is a complete sentence that does not require additional clauses, addenda, or stipulations. This is worth fighting with your girlfriend about, and you should strongly oppose her bizarre moral calculus.

There are numerous ways to support the Red Cross’ relief efforts: You can text the word HARVEY to 90999 to make a one-time $10 donation, visit redcross.org, or call 1-800-RED-CROSS. The Center for International Disaster Information recommends donating cash over supplies in the wake of a national disaster because it comes with “no transportation costs, shipping delays, or customs fees. It also enables relief organizations to spend more time providing aid by spending less time managing goods.” You can also donate to local food banks, shelters, and other organizations; there’s a longer list here.

Well, even a broken clock is right twice a day, so I commend Slate for actually telling this woman that her girlfriend is, well, unhinged. Second, this is the ugly nature of identity politics and American liberalism. Given this bizarre incident, the people who have voiced publicly that Texas deserved the hurricane, or any notion that helping a red state is difficult, it seems that Democratic voters are so burned by their 2016 loss. Screw red states, they deserve it.

Second, I think they can’t stand to see images of Americans of all races, creeds, and ethnicities helping each other out and supporting one another in the face of catastrophe. This prevents their poisonous cookie cutter-style politics from being effective. To punish people because they voted for someone with whom you disagree is anti-American, illiberal, and just plain crazy. Who the hell thinks like this? And the liberal media says conservatives, Republicans, and white guys are the problem with America. Yeah, sure—keep thinking that.

Oh, and apparently everyone in Texas is a Nazi, according to Charlie Hebdo. Is it vile, idiotic, and absolutely within their right under the principle of free speech to print such material? Yes. But that doesn't mean we can't respond and it certainly shows how insane the Left has become.

This Charlie Hebdo cover on the Houston disaster is, even by their standards, absolutely disgusting.https://t.co/iaIReTHlnV pic.twitter.com/BMHpXCqAnS