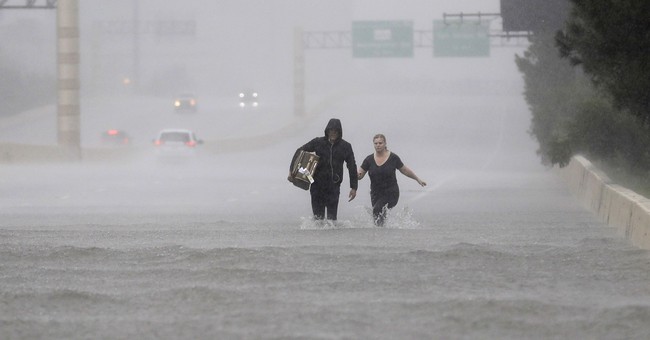 Our friends at Twitchy have been monitoring social media, as they usually do, for the wild and the wacky from the Left. In the case of the major hurricane slamming Houston right now, not even life or death situations can prevent progressives from being triggered. Logan Anderson worked on Hillary Clinton’s failed 2016 campaign and she did not like that there was a Confederate flag on a boat that was helping black residents get to safer ground. However you may feel about the Stars and Bars, it’s totally irrelevant in these situations. Who cares? The water is rising. People could die. Who really cares about a Confederate flag on a boat? Now, she does say that in this situation, she would have jumped into the boat and then ripped off the flag. Then again, it looks like it’s attached to the rudder of the airboat, so maybe that’s not such a good idea.

Y'ALL, THE CONFEDERATE FLAG CROWD IS HELPING BLACK PEOPLE EVACUATE IN HOUSTON AND I CANT ??????#houstonflood pic.twitter.com/fYqENmaR0S

(I would absolutely get on that boat, by the way. And then, when they dropped me off, I'd tear off the flag and drop it into the flood.)

If they fly a flag that represents the fight to keep their "neighbors" as slaves, I doubt they usually care about those neighbors' wellbeing https://t.co/rFjdHrvo09

Yes, historically, the Confederate flag is probably not one of the best things to come out of American history, though it’s also something that’s inextricably linked to Southern culture. Yes, even African-Americans have been seen waving the Confederate flag. In terms of sports, Laremy Tunsil of the Miami Dolphins was caught in smoking marijuana in a video, which cost him millions prior to the NFL draft in 2016. If you watch the video, there’s a rather interesting flag hanging on the wall behind him—and it’s not the American flag. Yeah, he might have been high, but he was hardly triggered by it.

what is wrong with us lol pic.twitter.com/VvKmRs85H7

Yet, back to the point, in a life or death situation, no one cares about this crap. There can certainly be debates about the Confederate flag–and I'm sure we'll have more of them in the future–but that's not really a high priority action item in Houston.