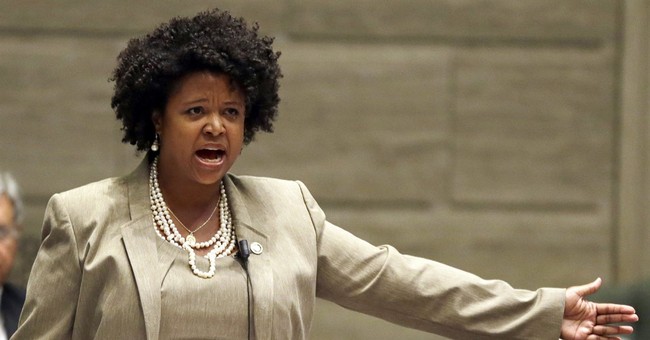 Embattled Missouri State Sen. Maria Chappelle-Nadal has been removed from her committee assignments as pressure grows for her to resign over remarks she made about President Trump. Chappelle-Nadal was caught in a Facebook exchange, hoping for the president’s assassination in the comment section. Yes, the Secret Service is investigating the matter. Sen. Claire McCaskill (D-MO) has called on her to step down, as did Stephen Webber, the chairman of the Missouri Democratic Party. Chappelle-Nadal did offer an apology, but it seems to be too little, too late. Lieutenant Gov. Mike Parson has called on the legislature to hold a special session to expel her (via Fox News):

Missouri Senate leaders announced Tuesday that Democratic state Sen. Maria Chappelle-Nadal has been stripped of her committee assignments, just two days after she tried to calm the controversy with a public apology.

Meanwhile, the state’s Republican lieutenant governor, Mike Parson, on Tuesday called for the Senate to go into special session to expel Chappelle-Nadal from the body.

“I do not make this request of you lightly, but you and I know it is the right course of action to take for the people of Missouri,” Parson wrote in a letter to members of the Missouri Senate.

Republican Senate President Pro Tem Ron Richard and Minority Leader Gina Walsh on Tuesday both rescinded the lawmaker’s nine committee assignments, with Richard saying in a brief statement: "I support the decision of Senate Minority Leader Gina Walsh to remove Sen. Chappelle-Nadal from all of her Senate committees. I am also removing her from all appointments under my authority."

The Kansas City Star’s editorial board was also quite adamant that the state senator has to go. Missouri Gov. Eric Greitens also joined the Chappelle-Nadal must go mantra. Right now, the world is collapsing in around Chappelle-Nadal, who now has no political allies, friends, or the ability to have any impact in the legislature. How long will she last?