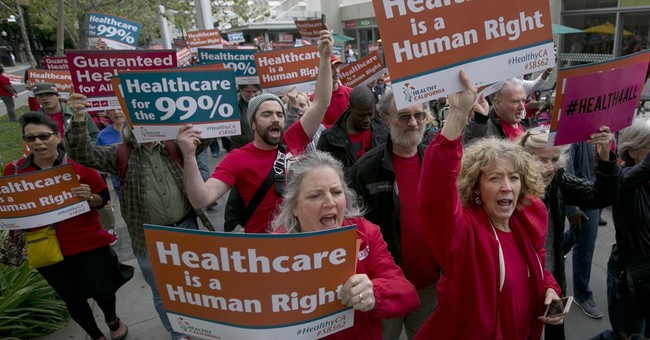 It’s no secret that single-payer health care is going to be a litmus test with Democrats. Abortion is a topic of debate as well, with the Democratic Congressional Campaign Committee receiving a furious backlash from their statement that they will not cut off funding to pro-life Democrats. These are becoming the two tenets for the Democratic Party: abortion on demand (and taxpayer funded) and promoting failed health care policies. Some liberals are giving stark warnings about the single-payer push, specifically that it’s not a principle, but a policy. Yet, there are other means to accomplish that left wing goal. Of course, anyone who’s sane wants nothing to do with socialized medicine, but Michael Tomasky of the Daily Beast warned his fellow liberals in an op-ed for The New York Times that perhaps this isn’t the hill to die on, especially when it comes to threatening other Democrats with primary challenges.

Single payer is a policy choice, not a principle. The principle is universal coverage. Single payer is one way to get there. It’s how Britain and Canada do it. But there are other ways. France uses a hybrid system that is mostly but not wholly single payer. Germany uses private insurers, mostly nonprofit, but gives the government more control over how they operate. In Japan, private insurance supplements a government-run basic insurance program.

Throughout most of American history, our parties have been amalgams of factions that disagreed fiercely on many matters and duked it out at the quadrennial convention. That had its downsides too, but it did mean that there was some overlap between the parties, whether Democrats and Whigs in the mid-1800s or, later, Democrats and Republicans.

That began to change after the Democrats embraced civil rights and emergent social issues forced the parties to choose sides. By now, of course, there’s no overlap at all. Ideological homogeneity has hit both parties, but it’s much more intense on the Republican side, because of the primary threat, and because the conservative media have created a large base that demands orthodoxy. If we begin to see primary challenges on the Democratic side similar to those mounted by Tea Party Republicans in recent years, we’ll have two equally rigid camps.

I’m a liberal who’d be perfectly happy with single-payer health care in this country. But I also support a functioning political system. If there had been even a few Republican moderates who voted for the Affordable Care Act, Congress might actually be fixing it in good faith right now. It appears that ship has sailed, on partisan seas that are about to get choppier.

Well, there was never going to be robust Republican support on Obamacare since the Obama administration and the Democratic Congress rammed it down our throats. Second, the Democrats don’t seem all that concerned about their push towards the left. Also, I think other liberals know full well that repeal of Obamacare is the only thing in the cards for the GOP. They have to—they campaigned on this for nearly a decade. A ‘hey, we tried’ result is not going to cut it. As for the lamenting that a more progressive Democratic Party will lead to more partisanship, it’s already here. California and New York liberals head the Democratic leadership. You don’t get any more bicoastal or progressive than that.

Right now, the Democratic Party is on the verge of all-out civil war with this fight over single payer. In California, it's become incredibly nasty, as state Democrats killed a $400 billion state-based single payer initiative due to lack of funding mechanisms; death threats and angry phone calls were hurled at state lawmakers. If this does become a litmus test for the Left--and i think it will--sit back and watch the fireworks. The blood sports will be highly entertaining.