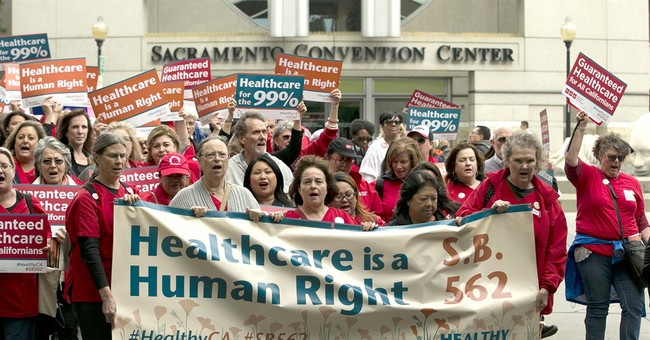 It’s no shocker that Democrats want universal health care. It’s a cornerstone of their ideology. As they wander helplessly in the political wilderness, Democrats are frothing at the mouth over Donald Trump’s win, the news media is fanning those flames, and they’re debating whether to moderate or push further towards the Left. Democratic leadership released their “Better Deal” agenda that sought to make up for the lack of economic messaging during the 2016 election. The problem is that it’s pretty much a carbon copy of Hillary Clinton’s platform. Nevertheless, support for single-payer health care has spiked among Democrats. Many are co-sponsoring legislation to that effect in Congress. It could become a litmus test for Democrats running in future elections.

Democrats are currently grappling with whether to support candidates who hold anti-abortion views, so this would be another headache for them, though I won’t be the one who stops them from walking into a political meat grinder. NBC News’ Benjy Sarlin and Alex Seitz-Wald wrote a lengthy piece about the Democrats’ odyssey towards single-payer, the obstacles that lie ahead, and how support for it could collapse overnight:

Conyers' bill, called "Medicare for All" and one of many like-minded approaches to single-payer, would entirely replace private insurance plans with free coverage of everything from eyeglasses to emergency room visits, paid for by new taxes concentrated on the wealthy.

I think single-payer is like a big old locomotive coming down the tracks," said Rep. Keith Ellison, D-Minn., a progressive leader who is also the deputy chairman of the Democratic National Committee.

Support for single-payer has jumped 19 percentage points among Democrats since 2014 — and nine points since January alone — to 52 percent, according to a Pew survey in June. With 85 percent of Democrats and Democratic-leaning independents now saying the federal government has a responsibility to make sure every American has health care, two-thirds of liberals favor single-payer as the means.

Dr. David Himmelstein, who co-founded Physicians for a National Health Program 30 years ago as a pro-single-payer alternative to the American Medical Association, called the current moment "a high-water mark" of his quixotic journey.

"Within the mainstream of the Democratic party, we've never had as much traction as today," he said.

A majority of the Democrats in the House — 115 out of 194 — are now co-sponsors of Conyers’ bill, including three members of the moderate Blue Dog caucus.

"A robust U.K. or Canada-style single-payer system could actually spend less money than what America spends," explained Avik Roy, president of the conservative Foundation for Research on Equal Opportunity.

But it would require cutting payments to doctors and enforcing other difficult cost-reduction measures. "To do that, though, you have to do the things that Canada and the U.K. do, which most U.S.-based advocates have been less comfortable doing," Roy said.

"There's a bit of a false dawn with single-payer that this is going to be popular even once details are known," said Jim Kessler, the senior vice president for policy at the centrist Democratic think tank Third Way.

"There's going to be tons of disruption," Kessler continued. "Maybe it's worth it, maybe it isn't. But before people sign on in a rush to it, we have to have a serious analysis of what it's going to mean for people and all the institutions involved."

While a slim majority favors the idea of a national health plan at the outset," wrote Liz Hamel and her colleagues at the nonpartisan Kaiser Family Foundation of their July poll, "the poll finds the public’s attitudes on single-payer are quite malleable, and some people could be convinced to change their position after hearing typical pro and con arguments that might come up in a national debate."

Many Democrats worry their party is hurtling toward a policy commitment they don’t fully understand when they should be focused on defending existing gains.

So, there you have it. There are no policy specifics on this initiative yet, but you get a sense that this big locomotive could easily go off the rails, and with progressives leading the charge—that chance is quite high. You know it will contain tax hikes that are insane. You saw this during the 2016 campaign, where Sen. Bernie Sanders’ (I-VT) health care agenda would have cost us $32 trillion. It could also hurt the working poor.  Vermont and California both tried to enact state-based single-payer systems and failed due to the extraordinary cost. Even The Washington Post editorial board noted that single-payer is absurdly expensive. California’s attempt would have cost them $400 billion and the bill that state Democrats scrapped had zero mechanisms to fund the measure. This legislative death of the bill brought on by California Democrats has led to progressives bombarding them with nasty phone calls, even death threats. It’s ugly.

You know the Left won’t be able to help, but hike taxes on everyone. Spend whatever need be to accomplish this feat, but also not tell them that to control costs access to certain specialized care treatments and doctors will have to be curtailed. More taxes for less care, that sounds like an awful trade off.

Sarlin and Seitz-Wald also noted billionaire Mark Cuban supports single-payer; he doesn’t. With the issues concerning cost, I think Democrats will soon find their big idea to be quite unpopular. No one likes higher taxes, especially in exchange for shoddier services. The article did mention that this could be a move to get a public option back on the table; a government-run health insurance plan that competes with those sold by private insurers. Yet, we’ve seen this move before. It will certainly die in the Senate and may receive a lukewarm reception in the House. Democrats tried this with Obamacare and failed. In fact, Obamacare wouldn’t have passed if a public option were included. Also, given the Sanders/Clinton divide in the Democratic Party, the public option might not be good enough for the progressive wing of the Democratic Party. They want single-payer. Period. Any thing short of that is going to be construed as the corporatist wing of the party selling out their base yet again. There’s also the divide on institutions within the Democratic Party among the Sanders and Clinton wings, which some, like New America’s Lee Drutman, say is the real civil war between the factions:

As part of a report I wrote for the Democracy Fund Voter Study Group, I looked at divides between enthusiasts for Senator Bernie Sanders and supporters of Hillary Clinton. For many policy issues I couldn’t find much difference of note, except for a little disagreement over the benefits of foreign trade. Most Democratic voters generally agree on first principles: Economic inequality is a problem; government should do something to help the less advantaged; diversity is a strength. That’s why getting to a shared “Better Deal” agenda was relatively easy.

Such divisions reflect a malady facing both parties: In a word, as the political scientists Daniel Schlozman and Sam Rosenfeld note, our parties are “hollow.” The parties, they write, are “neither organizationally robust beyond their roles raising money nor meaningfully felt as a real, tangible presence in the lives of voters or in the work of engaged activists.”

No wonder many voters distrust institutions and the establishment. Their engagement with the party mostly consists of receiving fund-raising emails intended to enforce programmatic conformity while activating fear of and resentment toward the other party.

Republicans have already suffered the costs of feeding their supporters a toxic diet of anti-Democratic Party propaganda. They wound up with Mr. Trump as their standard-bearer. Democrats should not make that mistake.

Yeah, Trump won the election, so he’s not a bad standard bearer. Second, the GOP is the dominant political force in the country, and Trump ventured into the heart of rural America, to the core of the GOP base, and spoke to those voters. Even Democrats in these areas like Trump’s message on jobs and economic growth. So much that 7-9 million of Obama voters backed Trump last year. The GOP is not hollow. The Democrats, on the other hand, are, given their inability to raise money, resonate with people outside of large cities, and their diminished presence at the state and local level. The party is hollow. It’s been that way since the 2014 midterms at least. There is no candidate who is under the age of 55, maybe 65 that can win.

Circling back to single-payer, if the Democrats get serious about this, they will hit the wall of reality concerning cost. No one wants to say they’re willing to support trillions in tax hikes. That’s bad politics and bad for American businesses. Tax and spend labels will be resurrected by this. They will almost certainly overreach and promise, like Obamacare, that it will reduce costs; it won’t. On top of that, you have the headaches over support for pro-life Democrats in elections, now the red meat of policy analysis, plus this chasm on trusting institutions. There's a lot of repairs needed to be done and I don't think Democrats are capable of it. Also, if this becomes the new litmus test for Democrats, well, it’s a good way to go further into that dark, dark wood you find yourselves trapped in post-2016.