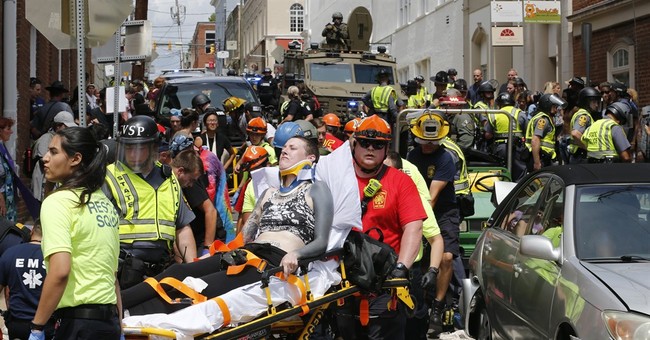 The driver who plowed into counter protestors at the white nationalist rally in Charlottesville, Virginia has been identified and charged with second-degree murder. James Alex Fields Jr., 20, of Ohio was arrested shortly after the incident that left a 32-year-old woman dead. Nineteen others were injured in the crash. It marked a dark day in the city, where dozens were injured in melees. Two troopers were also killed when a Virginia State Police helicopter crashed

The suspect being held in a Virginia jail in connection with a deadly crash near a scheduled rally of white nationalists has been identified as James Alex Fields Jr., 20, of Maumee, Ohio, according to Superintendent Martin Kumer with the Albermarle-Charlottesville County Regional Jail.

Fields is being held on suspicion of second-degree murder, malicious wounding and failure to stop in an accident that resulted in death.

One person died and 19 were injured Saturday when a car rammed a crowd of counterprotesters gathered to oppose a "Unite the Right" rally of white nationalist and other right-wing groups.

Charlottesville Police Chief Al Thomas said the suspect was taken into custody not far from the crash site.

Thomas told reporters a 32-year-old woman was killed while she was crossing the street. Her name was not released.