Feminist: I Know I Shouldn't Generalize, But Men Are Not Safe And That Includes My Sons 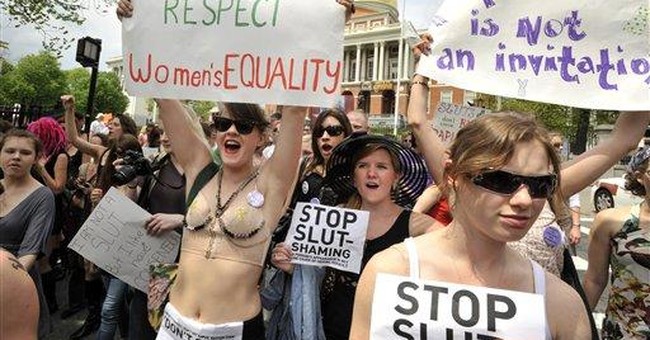 You know my mom is a liberal, a Democrat, and a feminist and she didn’t turn out to be like this unhinged lady. Earlier this month, Jody Allard penned an essay where she’s said she’s had it: Men are unsafe and that includes her sons. Well, that’s some comforting parenting advice right there; your mom thinks you’re some sort of monster in waiting. If there’s any reason why feminism isn’t looked upon positively, even among women, it’s because of this unadulterated crap. The irony is that the vast majority believe in equality of the sexes. Now, that’s a mainstream concept. Yet, like Hillary Clinton, writing off half the country as deplorable because they support Donald Trump, you’re going to find the same messaging issues with this equality issue when you think half of the human population are unsafe—whatever that means. If this name doesn’t sound familiar, Allard penned an op-ed in The Washington Post, where she said, again, that her sons are blind to rape culture. The whole essay is, well, rather something if you hadn’t guessed:

To the sons of Jody Allard - on behalf of the internet I want to express my apologies about your mother being a nutcase. pic.twitter.com/YWOpxufSYP

One of my sons was hurt by my words, although he’s never told me so. He doesn’t understand why I lumped him and his brother together in my essay. He sees himself as the “good” one, the one who is sensitive and thoughtful, and who listens instead of reacts. He doesn’t understand that even quiet misogyny is misogyny, and that not all sexists sound like Twitter trolls. He is angry at me now, although he won’t admit that either, and his anger led him to conservative websites and YouTube channels; places where he can surround himself with righteous indignation against feminists, and tell himself it’s ungrateful women like me who are the problem.

As a single mother, I sometimes wonder whether the real problem is that my sons have no role models for the type of men I hope they become. But when I look around at the men I know, I’m not sure a male partner would fill that hole. Where are these men who are enlightened but not arrogant? Who are feminists without self-congratulation? If my sons need role models, they may have to become their own.

I joined Bumble recently, after a six-plus year break from dating. I’m not overly interested in dating in the first place, but I’m starved for adult conversation so dating feels like a necessary evil. Bumble, as I explained to my married friends, is like the feminist Tinder. Women have to initiate contact with men, so at least there’s no inbox full of dick picks every day. But, feminist or not, the men are no different from the men anywhere else and I quickly felt deflated. If the feminist men — the men who proudly declare their progressive politics and their fight for quality — aren’t safe, then what man is? No man, I fear.

My sons won’t rape unconscious women behind a dumpster, and neither will most of the progressive men I know. But what all of these men share in common, even my sons, is a relentless questioning and disbelief of the female experience. I do not want to prove my pain, or provide enough evidence to convince anyone that my trauma is merited. I’m through wasting my time on people who are more interested in ideas than feelings, and I’m through pretending these people, these men, are safe.

I love my sons, and I love some individual men. It pains me to say that I don’t feel emotionally safe with them, and perhaps never have with a man, but it needs to be said because far too often we are afraid to say it. This is not a reflection of something broken or damaged in me; it is a reflection of the systems we build and our boys absorb. Those little boys grow into men who know the value of women, the value that’s been ascribed to us by a broken system, and it seeps out from them in a million tiny, toxic ways.

Are you kidding me lady? Most men don’t rape, or are rapists-in-waiting, or overall monsters. It’s also weird how rape and political affiliation were combined, as if progressive men are not capable of such horrid violence. Everyone is capable of this—the world is imperfect. She goes on about loving her sons, but could you imagine being subjected to this drivel every day.

“Son, I love you, but you’re just a monster in waiting.” Yeah, we have the winner of the mom of the year award—Good Lord.

All I can say is that my mom, the liberal feminist, told me about respecting women without going into an acid-riddled Margaret Atwood crap fest like what’s published above. I was smothered with love once I arrived off the plane from South Korea, so much so that one of my mom’s regrets is that she wished she had let me play with my toys as a baby a little more. I don’t really remember, but it’s because she wanted to hold me all the time. My father, brother, and uncles reinforced what my mom told me, while the women in the Vespa clan are, well, people you don’t want to trifle with—they’re independent, strong, and—pardon the expression, but they will rip you a new a**hole if you get in their way. Everyone’s family is different. I know some aren’t as lucky as I am—but I think we can all agree that telling some members of your family 'I don’t feel safe around you because of your gender' is nonsensical.