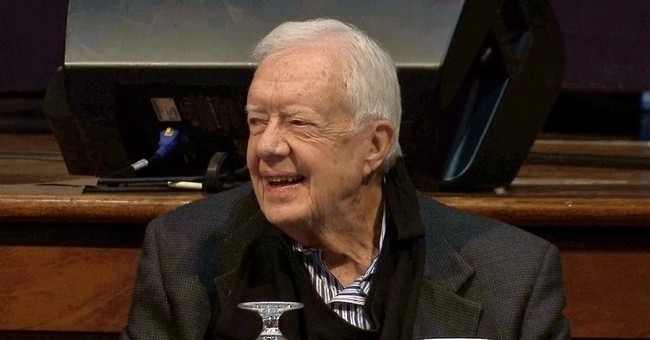 With Trump’s lackluster unpopularity (though it’s different in rural areas) and congressional Republicans failing to push a successful heath care reform package, Democrats are taking their single-payer health care initiative for a spin. Buoyed by polls showing that a majority of Americans think government should provide access for health care coverage and growing support for single-payer itself, the Sen. Bernie Sanders (I-VT) wing of the Democratic Party has been more active on this policy issue. It appears to be paying off. While California Democrats killed a state-based initiative due to the bill have no funding mechanism, more and more Democrats seem to be either supporting it outright, or saying it should be at least considered for the near future.  Former President Jimmy Carter is now onboard the single-payer train (via WSJ):

Former President Jimmy Carter said he believed the U.S. would in time adopt a fully government-run health insurance system, or “Medicare for all,” in remarks ahead of his Sunday school class here.

“I think eventually we’ll have a single-payer system,” said the former U.S. leader, a Democrat, speaking in front of a full congregation and hundreds of visitors.

Mr. Carter had previously said he was disappointed the 2010 health law passed under President Barack Obama had not gone further.

“When I was in the White House, I tried to get Medicare to cover everyone,” he said, adding that his efforts to expand the insurance program for Americans 65 and over to others was blocked by the late Sen. Ted Kennedy of Massachusetts, a Democrat.

Well, if boldness is the signal Democrats want to send voters, this is a way to do it. The next step is explaining to them how a system based on massive tax increases, reduced access to care, and a degraded quality of care would benefit everyone. That is something I don’t think Americans will stomach in the slightest.