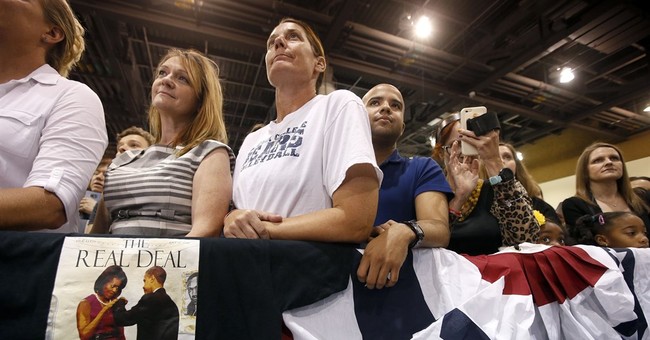 The Democrats have a lot of issues to deal with in the wilderness. Who’s the leader? What’s the agenda? What’s the message? Do we need to moderate? Do we need to push further to the left? For one Clinton pollster, it’s the former; let’s gravitate towards the center and win elections again. Mark Penn co-authored a column in The New York Times earlier this month, where they said the party must drop identity politics and the toxicity that comes with it to the national discourse. That alone has put these two men in the Democratic doghouse, though there are aspects of their agenda that Republicans should be mindful of since they could resonate with the white working class voters Democrats need to win back but are reticent to do so [emphasis mine]:

Central to the Democrats’ diminishment has been their loss of support among working-class voters, who feel abandoned by the party’s shift away from moderate positions on trade and immigration, from backing police and tough anti-crime measures, from trying to restore manufacturing jobs. They saw the party being mired too often in political correctness, transgender bathroom issues and policies offering more help to undocumented immigrants than to the heartland.

Bigger government handouts won’t win working-class voters back. This is the fallacy of the left, believing that voters just need to be shown how much they are getting in government benefits. In reality, these voters see themselves as being penalized for maintaining the basic values of hard work, religion and family. It’s also not all about guns and abortion. Bill Clinton and Barack Obama both won working-class voters despite relatively progressive views on those issues. Today, identity politics and disdain for religion are creating a new social divide that the Democrats need to bridge by embracing free speech on college campuses and respect for Catholics and people of other faiths who feel marginalized within the party.

There are plenty of good issues Democrats should be championing. They need to reject socialist ideas and adopt an agenda of renewed growth, greater protection for American workers and a return to fiscal responsibility. While the old brick-and-mortar economy is being regulated to death, the new tech-driven economy has been given a pass to flout labor laws with unregulated, low-paying gig jobs, to concentrate vast profits and to decimate retailing. Rural areas have been left without adequate broadband and with shrinking opportunities. The opioid crisis has spiraled out of control, killing tens of thousands, while pardons have been given to so-called nonviolent drug offenders. Repairing and expanding infrastructure, a classic Democratic issue, has been hijacked by President Trump — meaning Democrats have a chance to reach across the aisle to show they understand that voters like bipartisanship.

Immigration is also ripe for a solution from the center. Washington should restore the sanctity of America’s borders, create a path to work permits and possibly citizenship, and give up on both building walls and defending sanctuary cities. On trade, Democrats should recognize that they can no longer simultaneously try to be the free-trade party and speak for the working class. They need to support fair trade and oppose manufacturing plants’ moving jobs overseas, by imposing new taxes on such transfers while allowing repatriation of foreign profits.

All of this, if messaged properly, could spur Trump voters to back a Democrat. Remember they’re not die-hard Republicans. If the GOP Congress and Trump fall short on health care, tax reform, trade deals, and infrastructure, it’s possible these voters could back a Democrat if (a big if too) Democrats play this game. Also, drop the single-payer nonsense. Trump voters don’t like the GOP health care alternative, with almost 60 percent unsure about the Republican health care push in in general. That’s a wide swath of voters to make inroads in, but single-payer is probably the one plan that would lead to disaster financially and politically in rural America. The trade offs concerning tax increases and reduced benefits is just unpopular, not to mention that it’s ruinously expensive. Yet, that’s the path the Left desperately wants to go—and the rank-and-file of the party, mostly urban professional who adhere to the doctrine of politically correctness—are not apt to listen to Clintonite advice anymore, especially after their upset loss in 2016. That’s evident in the media reaction from liberal sites to this piece (via New Republic):

Penn also addresses the party’s approach to the working class. According to Penn, Democrats alienated this group by shifting leftward on trade, immigration, and policing. There is a simple test for determining what is a serious political opinion in 2017 and what is not, and it is this: Does the writer understand that the working class is not all white? In Penn’s case the answer appears to be “no.”

But Penn is used to being wrong. After working for Bill Clinton, he worked for Hillary Clinton’s 2008 campaign—she lost, of course, to Barack Obama, who ran to her left at the time and is mostly absent from Penn’s version of history, despite uniting the party’s factions and winning the general election twice. (Penn concludes with an ode to “can-do Democrats in the mold of John F. Kennedy and Bill Clinton”—not Obama.) He also worked for Tony Blair, that paragon of centrist war-mongering virtue; Blair recently covered himself in glory by calling for a similar return to the center, just before Labour’s unapologetically left-wing manifesto earned it unforeseen success in the U.K.’s snap election.

It is telling—deeply, devastatingly telling—that Penn has apparently learned nothing from his decades in politics. His thoughts are stale; his politics are discredited. The Democratic Party should ignore him for its own benefit—and ours.

Ouch. Though I would add that while the UK’s Conservative Party has been thrown into chaos due to the snap election, Labour didn’t win; Theresa May, for the time being, is still prime minister. In North Carolina, was Republican Gov. Pat McCrory’s re-election defeat in North Carolina due to voters being against the transgender bathroom bill or simply tired of losing billions from the fallout, which in turn hurts their wallets. That’s not necessarily an explicit vote against the idea of such a bill; it’s a vote to stop the economy from burning. There’s a difference. Also, yes, not all working class voters are white, but, again, these are the voters Democrats need to win to retake Congress and the White House and they’re 44 percent of all eligible voters. That’s rather significant. So far, the Democratic attempt at rebranding has been met with mockery and ridicule. Also, say what you will about Penn, but Bill Clinton won twice and Tony Blair was prime minster for 10 years under overwhelming Labour majority governments. That’s called winning, something that Democrats are trying to repeat and are failing miserably thus far in trying to find that path out of the wilderness. The GOP should take notes because while some on the Left know how to get out of the mud, the powers that be are ignoring them. Could be an opportunity to glean some material from this, especially the infrastructure and manufacturing parts. Concerning the wall, I think the verdict is out on that; it needs to be built to satisfy the Trump coalition. The problem is when will that happen.