Jane Sanders On FBI Investigating Her For Bank Fraud: It's 'Incredibly Sexist' 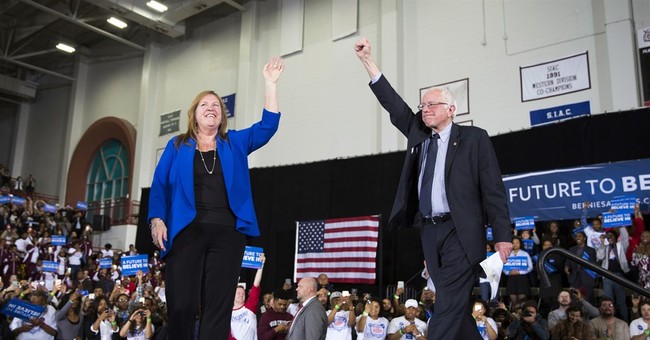 In case you missed it, Jane Sanders, wife of Sen. Bernie Sanders (I-VT), is under FBI investigation for possible bank fraud. The probe was launched under the Obama administration and it’s been ongoing for months. It centers on when Mrs. Sanders was president of the now-defunct Burlington College, which went under because Sanders drove it into the ground financially with a shoddy land acquisition deal around Lake Champlain to expand the campus. The land was owned by the local Catholic archdiocese, which had just settled sexual abuse claims to the tune of $17 million and was looking for cash. Through negotiations, she secured a $10 million loan, $6.7 million from People’s United Bank and $3.65 million from the Catholic Diocese of Burlington, to purchased the 33-acre addition. The Church was eager to get some cash for the settlements. It was a financial deal that sunk the college. The Sanders have lawyered up, with Sen. Sanders being accused of leaning on People’s United to sign off on the loan (via Politico):

Now, Mr. Toensing was Trump’s campaign chair in Vermont, which had led many within the Sanders’ inner circle to dismiss these charges. Granted, the evidence for bank fraud is slim, but as Katie noted from The Washington Post last week, the FBI is still digging through this.

The couple have some serious allegations lobbed against them, but they either don’t want to talk about it, dismiss it as a partisan witch-hunt, or claim it’s sexism (via Boston Globe):

“I find it incredibly sexist that basically he’s going after my husband by destroying my reputation, and that’s not OK,” she said in her first interview about the man responsible for an FBI probe that centers on her leadership at Burlington College, a small liberal arts school on Lake Champlain that she led from 2004 to 2011. The college closed last year as it struggled to pay its creditors and lost its accreditation.

First, these really aren't any defenses against the charges lobbed against you. Second, you destroyed a college, lady; your reputation was already in the crapper. Burdening a school with an enrollment of around 200 with a $10 million financial liability is not smart. The proof of that is that Burlington no longer exists. Is there bank fraud? We’ll still have to wait and see, but the Sanders are surely not giving any solid counterpoints to what Mr. Toensing has alleged other than he’s a sexist, which is typical of progressives to hurl at their opponents when they have nothing to say. Yet, perhaps this is a nothing burger, but, again, dismissing it as some project of sexism just doesn’t fit the bill. Then again, I know—these are progressives, socialists actually, whom am I kidding?

Also, it's not just Republicans who were looking at these charges—Democrats had Jane Sanders on their points of attack list against Bernie during the primaries (via Fox News):

According to a series of 2015 emails to and from Clinton’s campaign manager, John Podesta, leaked to and published on Wikileaks, the Clinton team wrote an extensive political opposition memo entitled “Sanders Top Hits-Thematics.” The memo details Mrs. Sanders’ role in the college’s financial failure, and parallels the ongoing FBI investigation, now before a grand jury, into the scandal.  Other email correspondence shows the Clinton team believed scandals surrounding the college and Jane Sanders provided an opportunity to knock the Vermont senator’s reputation and chances to win the Democratic primary election.

“I think our first question is how are we going to defeat Sanders. … he's not who he says he is -- gun votes, DSCC money, Jane. There may be other options too but these seem to be the strongest attacks to consider. How we undermine Sanders candidacy is our threshold question,” a Clinton campaign official wrote in the fall 2015.