Can We Talk About Bernie Sanders And His Wife Being Under FBI Investigation? 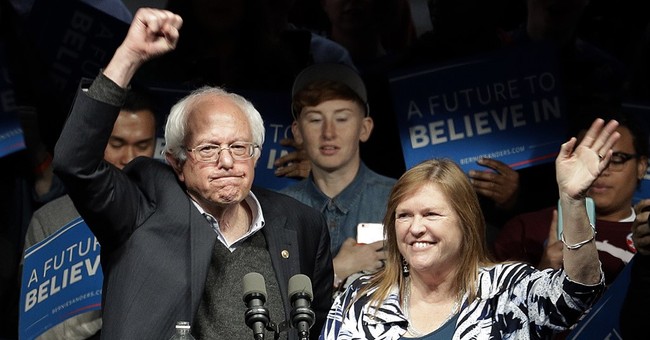 Oh, the ghosts of Burlington College are back to haunt the Sanders. In 2016, reports about Sen. Bernie Sander’s (I-VT) wife, Jane, running the college into the ground, coupled with his tax plan, made for some good cannon fodder against the self-described democratic socialist’s financially reckless agenda during the 2016 primaries. Yet, what was missed was the fact that the FBI began peering through the financial records of the college, which had secured a $10 million loan, $3.65 million of which came from the Church, to expand the campus along Lake Champlain. The local Catholic diocese had owned the property and had just settled on sexual abuse charges that totaled over $17 million. They were eager to sell. Still, the college’s plan to expand seemed lofty. It only had an enrollment of around 200. In short, this expansion project sunk the college, but the loan to secure the purchase involved Sen. Sanders, who reportedly placed pressure on the People’s United Bank for the loan. Yes, Democrats will deflect saying that, Brady Toensing, Trump’s campaign chair in Vermont, was the one who dug into this transaction and found possible evidence of bank fraud. Still, the couple has dismissed the claims until now; lawyering up for an investigation that has spanned months that was started under the Obama administration. Politico had a lengthy piece on the subject (via Politico):

Sanders and his wife have been trying to ignore the federal investigation since reporters for VTDigger, an online publication, confirmed the FBI’s involvement in April. The original request for an investigation into the potential bank fraud did indeed come from Brady Toensing, an attorney who chaired Trump’s Vermont campaign, and whose January 2016 letter to the U.S. attorney for Vermont put federal agents on the trail.

Beyond the glare, federal investigators and FBI agents started to pull apart the $10 million financial arrangement. They showed up at Burlington College to sift through hard drives, audit reports and spreadsheets. They began to interview donors, board members and past president Carol Moore. “I was contacted and spoke with an FBI agent numerous times last spring, again last summer,” Moore told Vermont Public Radio in May 2017, “and recently, maybe a month ago.”

A second letter to federal prosecutors in early 2016 alleged that Senator Sanders’ office had pressured the bank to approve the loan application submitted by Jane Sanders. “Improper pressure by a United States Senator is a serious ethical violation,” the letter asserted.

The records showed that Sanders had assured People’s United Bank and the state bonding agency that the college had $2.6 million in pledges to secure the loan. Internal college audits showed that only $676,000 in actual donations came in from 2010 to 2014. Sanders listed two people as having confirmed pledges for more money than they had offered; neither knew their pledges had been used to support the loan. A third donor had offered a $1 million bequest, to be paid upon her death. Instead, the college’s loan application counted it in funds to be paid out over the next few years.

The donor, Corinne Bove Maietta, told VTDigger she had made the bequest contingent on her death, but was surprised the college counted the $1 million toward paying off the land loan. “They had me in increments?” Maietta asked, from her home in Florida. “No, never.” She and her accountant said Sanders asked Maietta to sign documents confirming the donations, but they declined. Maietta said investigators with the Federal Deposit Insurance Agency had interviewed her about the loan details. At the time, Sanders declined to comment.

Now, the article does say that the evidence for such the allegations is thin, and that the senator’s pressuring might have been mere “casual suggestion.” According to legal experts the publication spoke to, proving bank fraud means, “it requires that the act be performed knowingly.” Not an easy task, but there was certainly enough to go on here for the FBI to take a look. The rest of the investigation is now in the hands of President Trump’s Department of Justice and the Vermont U.S. Attorney’s Office, which is vacant at the moment. The Sanders have reportedly retained the legal representation of Rich Cassidy, who represented former Vice President Dick Cheney’s Chief of Staff I. Lewis “Scooter” Libby.