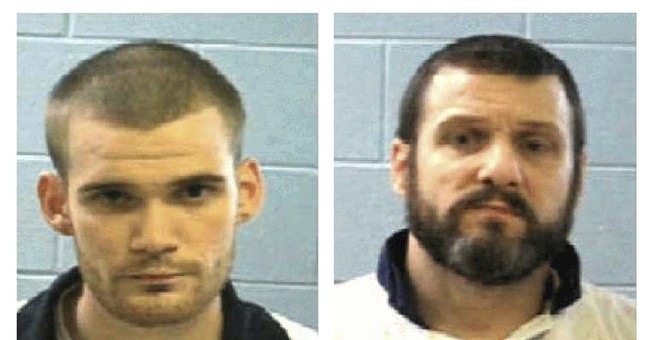 Members of Congress played baseball for charity and to support their colleague, House Majority Whip Steve Scalise, who was shot by anti-Trump activist James Hodgkinson. He’s doing better after three surgeries, but remains in critical condition. To the south, Georgia Gov. Nathan Deal announced that two escaped inmates, who had murdered two correctional officers had been caught in Tennessee.

Ricky Dubose and Donnie Russell Rowe set of a nationwide manhunt after the two men overwhelmed and murdered correctional officers Sgt. Chris Monica and Sgt. Curtis Billue on Tuesday. The two men apparently conducted a home invasion and stole a vehicle, which occurred prior to their recapture by authorities (via Fox News):

Miles said Rowe and Dubose broke into the home of an elderly couple in Shelbyville, Tenn. and held them captive before fleeing in the couple's vehicle. Local police responded and began chasing the pair. Eventually, the fugitives got into a wreck and fled the vehicle on foot.

Putnam County Sheriff Howard Sills said Rowe and Dubose surrendered after fleeing into some woods. He said that shots were fired, but did not say by whom. The inmates were unharmed and there were no reports of injuries to law enforcement personnel.

There was a $130,000 reward for any information that would lead to the capturing of Dubose and Rowe. Gov. Deal released this statement upon their arrest:

“Earlier tonight, with the assistance of our law enforcement partners in Tennessee, dangerous fugitives were captured and taken into custody,” said Deal. "Rest assured, justice will be served. My sincere thanks to our local, state and federal law enforcement officers who assisted in the manhunt. Because of their tireless efforts, the public is safe. The pain endured by the families and loved ones of Sergeant Christopher Monica and Sergeant Curtis Billue endures, however. We will do everything in our power to support their loved ones, and we will not forget their sacrifice and service.”

CNN added how several cars were stolen, leading up to the home invasion of the elderly couple. Besides stealing their car, they also took clothing, shoes, jewelry, and ate some sort of “beef like stew.” When they were on the run from the police in the woods, a gun-owning homeowner captured the two fugitives. The news organization added that Dubose and Rowe were unarmed at this point, losing their weapons in the crash. They had no choice but to surrender. Another example of a good guy with a gun stopping crime:

They ditched their uniforms for stolen clothes when they ransacked a house about 30 miles from where they left the bus, Sills said.

At that point, a deputy tried to pull them over without knowing it was the escaped inmates, Rutherford County Sheriff Mike Fitzhugh said.

Several SUVs were hit when the escapees drove away, opening fire on deputies as they fled. No one was injured, officials said.

Dubose and Rowe crashed the stolen SUV and ran into some woods. Some police cars followed them while others stayed back blocking the highway.

The bravery of a homeowner put an end to the three-day long manhunt, Fitzhugh said.

The inmates had run through the woods to a home on Pruitt Road, near the rural community of Christiana.

The homeowner called his neighbor and both men, each armed with a gun, confronted the fugitives.

Having lost their weapons in the crash, Dubose and Rowe surrendered, authorities said.