Former Clinton Campaign Chair: Trump Is Insane, But It's Too Early To Call For His Impeachment 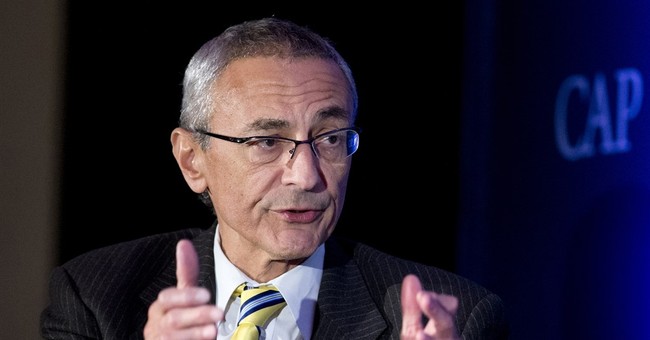 Former Clinton campaign manager John Podesta tore into President Trump, though it was to be expected, in an interview with Politico’s Susan Glasser this week. He said that the president was “absolutely crazy” concerning the firing of James Comey as director of the FBI (via The Hill):

“It’s laughable, really laughable that Donald Trump would fire Jim Comey because of his interference which damaged Hillary Clinton. I mean, it was laughable from the very beginning,” Podesta said during the interview.

“Just a complete misreading of reality.”

He noted that the events that have occurred over the last couple of weeks show that Trump is "incapable of doing the job."

Podesta said he believes it is "close to an obstruction case, either in the political context of impeachment, or in the context of a criminal grand jury investigation to indict somebody for obstruction."

Then, he said it was too early to call for his impeachment concerning the firing of Mr. Comey and the allegation that he obstructed justice with the DOJ’s ongoing investigation into Russian collusion during the 2016 election. More heat was brought down before the White House when the president told the Russians the day after he fired Mr. Comey that the man was a “nut job,” whose exit eased pressure on him from the investigation. Some pounced on this as evidence that an impeachable offense had occurred in the Oval Office. Others are more grounded, noting that all the evidence needs to be analyzed. Mr. Podesta seems to take that approach (via NTK Network):

“I think you can make an argument that the firing of the FBI director, in that context, clearly based on his own comments to the Russians, if nobody else, indicated that he was doing that because Comey was putting pressure on him.”

“I think that is close to an obstruction case, either in the political context of impeachment, or in the context of a criminal grand jury investigation to indict somebody for obstruction. I think it’s a little too early to say.”

So, there you have it. Clinton’s former top adviser, who appears to despise the man (no surprise there), says that impeachment talk is wholly premature. And it is. Yet, let’s not forget that he tweeted that Mr. Comey was nauseating the public with his testimonials before Congress, and then took a swipe at Trump for firing him. You’re either mad that Mr. Comey cost Hillary Clinton the election or outraged that the president fired the man looking into the collusion allegations. You can’t have it both ways. Democrats have been caught being nakedly hypocritical, with many calling for Mr. Comey to resign over his actions during the 2016 election—only to be incensed that the president fired him. House Minority Leader Nancy Pelosi (D-CA) said that she never called for Mr. Comey to be fired, only that he wasn’t right for the job. Is there any other way to read that other than he should have either resigned or been dismissed? Rep. Maxine Waters (D-CA) was even more brazen, saying that it was troubling that Trump fired Mr. Comey, but she would have been fine if Hillary had dismissed him should she have won the election.

@realDonaldTrump Didn't you know you're supposed to wait til Saturday night to massacre people investigating you? https://t.co/dQpgWsR6ND

Oh, and Mr. Podesta did touch upon Mr. Comey screwing them over; something that this team cannot forget or forgive, but it’s misdirected hostility. Mr. Comey didn’t cost them the election. Hillary Clinton lost because she was a complete nightmare. Yes, he somewhat took responsibility for the end result.

“Look, we bear responsibility, and it’s a great burden, and I feel it every day. I mean, we lost this election. We won the popular vote by three million votes, but we lost the Electoral College and we lost the election to Donald Trump,” he said.

Podesta later added that Mr. Comey played a “significant factor,” even in the face of the pollster autopsy that said his October 28 letter informing Congress that the FBI would be reviewing more emails probably didn’t impact the election, or at least you should be skeptical of that hypothesis. In fact, Clinton was rebounding in the weekend leading up to Election Day.

Well, first of all the popular vote in American presidential elections doesn’t matter, so stop embarrassing yourself and the only reason Clinton received more popular votes, though she did not win it outright (she got less than 50 percent) was because California is the mecca for every rabid lefty in the country. Second, she didn’t “win” the popular vote

Also, did Mr. Comey tell Clinton not to campaign in the Rust Belt, or not have an economic message, or tell half the country that they were deplorable? Mrs. Clinton only brought the FBI into the picture because she skirted the rules by having a private emails system that was unsecure and unauthorized from which the allegations that she mishandled classified information were justifiably lobbed in her direction. She didn’t think it was a big deal. The voters thought otherwise. If she had followed the rules and had an official government email account, the FBI would never have been troubled during the campaign. Hillary Clinton lost because she was a horrible candidate. It wasn’t Mr. Comey, or the letter, or the Russians—she lost because no one liked her, trusted her, or felt that she could help them in any way, shape, or form. Once the Left recognized how horrible she was last year, then maybe they can move on—but this clinging to a search to find something that might have cost her the election is getting tiring.