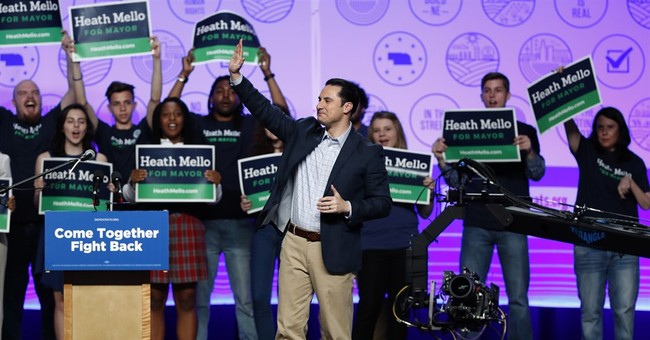 Remember Health Mello? He’s the Democrat who ran in Omaha, Nebraska’s mayoral race that voted for a sonogram bill when he was a member of the state legislature. It caused great heartburn for the Left, who are going through an identity crisis over whether to be a pure pro-abortion party, or accept that in some races—you might have to back a pro-life Democrat to win. Pro-life Democrats make up a sizable chunk, around 25 percent, of the Democratic Party. Sen. Bernie Sanders (I-VT) supported Mello’s candidacy, which irked his progressive following, though the darling of the Left said in order to protect a woman’s access to abortion—Democrats need to win again. That hasn’t happened yet.

In the era of rambunctious town halls and left wing grassroots energy, you would think the Indivisible crowd would, you know—win some elections. They haven’t. Mello lost the mayoral race Tuesday, marking zero wins Democrats have racked up so far in the Trump era. This loss is just another reminder to the left that their messaging is, well—too nutty for most of Middle America (via AP):

Democrats again fell just short in a closely-watched election as Heath Mello lost the Omaha mayoral race on Tuesday after a fierce debate within the national party over his anti-abortion views.

His loss was a setback for supporters who argued that the Democratic National Committee and abortion rights groups were wrong to attack the anti-abortion former state senator.

Mello, a 37-year-old Catholic from Omaha’s working-class south side, had become a flashpoint for the internal Democratic battle over whether a candidate’s position on reproductive rights should disqualify him from support by the national party after its crushing losses around the country last year.

Tuesday, Mello acknowledged the “completely different dynamic” the campaign took on in the closing weeks, but noted what he described as unified support across ideological lines.

Well, obviously not since you lost, Mello. Republican Jean Stothert was re-elected to a second term.