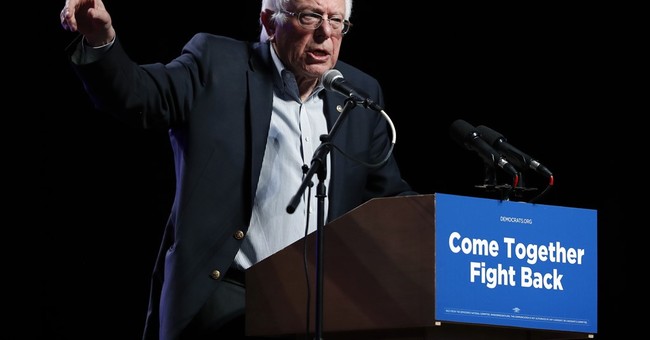 It seems even the most left wing elements of the Democratic Party aren’t for UC Berkeley’s anti-free speech antics. Sen. Bernie Sanders (I-VT) and DNC Deputy Chair Keith Ellison both condemned the efforts to shut down Ann Coulter’s planned speaking engagement at the hyper left wing campus on April 27. The school’s administration later cancelled the invitation, but re-invited Coulter to speak on May 2. Coulter said that would not be possible and is coming to Berkeley at her prearranged date. The UC Berkeley College Republican chapter said they plan to file a lawsuit against the school if they don’t provide a venue for the event, while Young America’s Foundation is reportedly searching for off-campus spots to host the conservative pundit. YAF has also said they plan to sue Berkeley over this matter.

Speaking in Omaha, Nebraska in support of Democratic mayoral candidate Heath Mello, Sanders said that efforts to shut down Coulter show noting more than intellectual weakness. Even Ellison noted that bad speech is only cured by more speech, citing how anti-civil rights forces of the 1960s used to file lawsuits against protesters and the news organizations that reported on their events to silence them (via Huffington Post):

I don’t like this. I don’t like it,” Sanders told The Huffington Post after speaking at a rally for Omaha mayoral candidate Heath Mello on Thursday night. “Obviously Ann Coulter’s outrageous ? to my mind, off the wall. But you know, people have a right to give their two cents-worth, give a speech, without fear of violence and intimidation.”

“To me, it’s a sign of intellectual weakness,” he said. “If you can’t ask Ann Coulter in a polite way questions which expose the weakness of her arguments, if all you can do is boo, or shut her down, or prevent her from coming, what does that tell the world?”

“What are you afraid of ? her ideas? Ask her the hard questions,” he concluded. “Confront her intellectually. Booing people down, or intimidating people, or shutting down events, I don’t think that that works in any way.”

Rep. Keith Ellison (D-Minn.), who was also in Omaha to speak at the rally for Mello, expressed similar sentiments, noting that opponents of the black civil rights movement sued protesters and media outlets that reported on them in an effort to restrict their speech.

Sanders took heat from pro-abortion groups for this rally with Mello, as he voted for pro-life legislation as member of the state legislature. The unabashed democratic socialist had no regrets, saying in order to win—you might have to back candidates with whom you may have disagreements on some issues.

Good on Sanders and Ellison for criticizing (and in the case of Sanders strong denouncing) these illiberal zealots and their insane antics to keep opposing views off their campus. Even HBO host Bill Maher said that UC Berkeley, once a cradle for free speech, has become just a cradle for “f**king babies.”