Uh, What: Democrat In Georgia Special Election Calls Non-Win A 'Victory For The Ages' 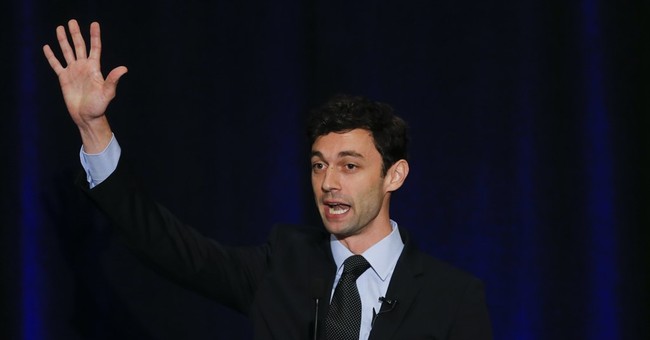 Guy covered the results of the special election in Georgia’s sixth congressional district, where a massive slate of Republican candidates split the vote, though it was enough to deny Democrat Jon Ossoff from getting 50+1 last night. In other words, without an outright majority, the two top vote getters, Ossoff and former Georgia Secretary of State Karen Handel, will be duking it out in a runoff election held on June 20. Still, the Left, desperate to find any good news post-2016, are saying how this is a warning sign. How Ossoff losing means that the GOP is in trouble. Yeah, and Ossoff, who doesn’t even live in the district, couldn’t get 51 percent after raising $8 million, almost all of it from outside Georgia, with a highly fractured (11 candidates!) GOP slate. Regardless, he declared that this special election non-win was a “victory for the ages” (via Politico) [emphasis mine]:

“We will be ready to fight on and win in June if it is necessary,” Ossoff told his supporters Tuesday night before the race was called. “And there is no amount of dark money, super PAC, negative advertising that can overcome real grassroots energy like this. So bring it on.”

Handel called for Republican unity as she claimed victory.

"Tomorrow we start the campaign anew,” she said, according to the Atlanta Journal Constitution. “Beating Ossoff and holding this seat is something that rises above any one person."

And both parties quickly sought to spin the inconclusive results as a major win for their side — as well as a statement on President Donald Trump’s popularity and the national political mood. Ossoff hailed the night as a “victory for the ages,” while Trump weighed in on Twitter to call the result a “big ‘R’ win.”

Take it down a few notches, man. First of all, you didn’t win. Second, you’re now facing just one GOP candidate, not 11. The other four Democrats running didn’t register on the radar. RedState’s Jay Caruso, a Georgia resident who lives near the sixth district, says that Ossoff’s only shot at victory was last night—and he failed. He predicts that the June runoff won’t be close. The sixth congressional district is a bastion for Rep. Tom Price, who left to become President Trump’s health and human services secretary, garnering landslide re-elects. In his 2010 election, he ran unopposed. It’s Tom Price country, but it’s not Trump country. Guy mentioned in his analysis how Karen Handel is better suited for that district:

Trump ran historically poorly for a Republican in this district. As I mentioned earlier today, he lost GA-06 to Marco Rubio by double digits in the presidential primary, and only beat Clinton by a lone point there. Then-Congressman Tom Price, by contrast, carried roughly 62 percent of the vote in November. Karen Handel is a lot closer to a traditional Republican than Trump is, which could prove to be an important advantage in two months. Make no mistake about it: The battle over this seat is not over, but this one stings for the Left. They sunk millions of dollars and enormous energy into the race, and they weren't able to win.

When you add it all up, total GOP vote in #GA06 could end up 1-2% ahead of total Dem vote, basically same as '16 presidential margin.

Also, while there was a divided GOP slate last night, you can catch a glimpse of the GOP vote share, which was slightly more than Democrats. Now, there will be no more division—and the GOP will most likely unite behind Handel. You can also expect Ossoff to be hammered for not living in the district, being subsidized by those who don’t live in Georgia, lying about his national security credentials, and much more that the GOP held back since they felt it wouldn’t work as well in a jungle primary setting.

GOP operatives will say, FWIW, that they have more in store for Ossoff that they didn't think would work in unique jungle primary

Stay tuned, but also ponder this:

To preface tonight: in my 12+ years covering House races, I've never seen one overhyped quite like #GA06.