North Carolina's Bathroom Bill Drama Could Be Over 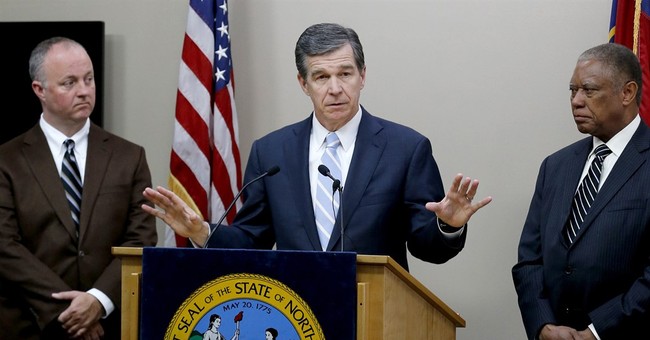 Well, it looks like a deal has been struck between Democratic Gov. Roy Cooper and the Republican legislature over the bathroom bill that has plagued the Tar Heel State since Republican Gov. Pat McCrory signed it into law. Economic opportunities and business has avoided the state like the plague over a bill that some say is discriminatory towards transgender Americans. The economic losses could be catastrophic. A projection showed that $3.7 billion would be lost in lost economic activity if the bill remained on the books for a 12-year period, according to the Associated Press. The Washington Post reported how this deal was struck as the NCAA deadline loomed. The collegiate athletic association threatened to move games out of the state. This current basketball season saw North Carolina stripped of hosting championship games, according to Reuters. Gov. Cooper said that the deal isn’t perfect, but it would help restore the state’s reputation. Former Gov. Pat McCrory, who lost his re-election bud due to this law, also backed the deal (via WaPo):

BREAKING: North Carolina GOP legislators say they have a deal with governor to end standoff over state's "bathroom bill."

The controversial and costly law, House Bill 2 (or “H.B. 2”), is largely known for its provisions that require people to use public restrooms that match the sex on their birth certificates rather than their gender identities. But it also had other, more far-reaching provisions, limiting some minimum-wage standards and reversing local ordinances that had expanded protections for LGBT people.

According to the text of a bill aimed at repealing the bathroom measure, lawmakers would also enact a law stating that “no local government in this state may enact or amend an ordinance regulating private employment practices or regulating public accommodations.”

“Compromise requires give and take from all sides, and we are pleased this proposal fully protects bathroom safety and privacy,” Berger and Moore said in a joint statement.

In a statement late Wednesday, Governor Roy Cooper (D) endorsed the deal while noting that it was not a “perfect” agreement.

“I support the House Bill 2 repeal compromise that will be introduced tomorrow,” he said. “It’s not a perfect deal, but it repeals House Bill 2 and begins to repair our reputation.”

I urge #NCGA & @NC_Governor to finally stick with this deal that still respects privacy and let Supreme Court resolve issue for our nation.

Democrats don’t seem too pleased, but a vote on this measure is set to happen later this morning.