Flashback: That Time When Pelosi Said Town Hall Protests Were Un-American Because Democrats Were Targeted 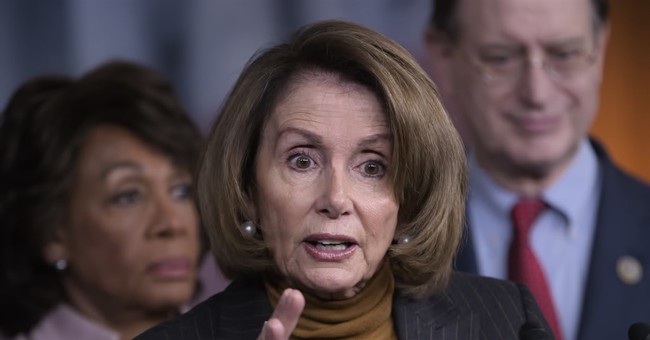 In Nancy Pelosi’s world, town hall protests are un-American only if they’re against liberal policies. If conservatives are in the crosshairs, it’s a patriotic exercise. That can be the only explanation for this bout of amnesia. At a prebuttal press conference at the National Press Club on February 27, one day before President Trump’s joint address to Congress, the House Minority Leader commented on the recent protests at Republican town halls.

“The women, men, and children who poured into the streets for the Women's March, those who turned out at airports shortly thereafter, and town halls in the weeks since, they honor the vision of our founders,” Pelosi said.

She added “The American people are mobilizing. As long as Republicans continue down this destructive and radical path, the public resistance will only increase.”

She also mentioned that Democrats are looking at ways to impeach the president. You see now that the protesters are creating havoc at GOP town halls due to their positions about repealing and replacing the signature domestic achievement of the Obama White House, these folks are patriots. Yet, when conservatives were voicing their outrage over Obamacare in 2009, Pelosi and Rep. Steny Hoyer (D-MD) called these antics un-American. Let’s circle back to their 2009 op-ed in USA Today[emphasis mine]:

However, it is now evident that an ugly campaign is underway not merely to misrepresent the health insurance reform legislation, but to disrupt public meetings and prevent members of Congress and constituents from conducting a civil dialogue. These tactics have included hanging in effigy one Democratic member of Congress in Maryland and protesters holding a sign displaying a tombstone with the name of another congressman in Texas, where protesters also shouted "Just say no!" drowning out those who wanted to hold a substantive discussion.

These disruptions are occurring because opponents are afraid not just of differing views — but of the facts themselves. Drowning out opposing views is simply un-American. Drowning out the facts is how we failed at this task for decades.

Health care is complex. It touches every American life. It drives our economy. People must be allowed to learn the facts.

Right, so was it un-American when anti-Trump group Indivisible was caught plotting to create a hostile environment for Sen. Bill Cassidy’s (R-LA) town hall event, and hoping to dominate the Q&A by drowning out questions they didn’t like? Yes, health care is complex, but it doesn’t take a genius to know that more government involvement only leads to more problems. With Obamacare, we have exploding premiums, a middle class that can’t afford the plans, and millions of Americans who have lost their coverage. Even Bill Clinton called it the “craziest thing in the world.”

Ed Morrissey added that Pelosi’s 2009 views on town halls shows how Democrats act when they’re in the majority. Doth not protest too much because they see themselves as royalty:

There could be nothing more American than appearing at a town hall and confronting elected officials over their wrong-headed policies, especially when those policies accrue more power to the federal government and eliminate freedom of choice for American citizens. Nancy Pelosi and Steny Hoyer don’t agree. They apparently believe that their elected positions gives them the right to dictate to the country, and the right to be free of protest and dissent. In other words, they see themselves as royalty — as if they themselves were the state, and any protest is un-American simply because it opposes their policies.

They’re impugning your patriotism for using the First Amendment. That tells us everything we need to know about the Democratic majorities in the House and the Senate. This is a new low in American politics, and both Pelosi and Hoyer are foolish enough to put it in USA Today for all to see it.

Some Republicans are canceling town hall events, or they’re holding phone town halls, to avoid protesters. That’s wrong. This is part of the job—and they had to have known their liberal constituents would go insane over Trump. At the same time, Pelosi’s flip-flop over town hall protests is shamefully transparent. It’s part of the Left’s insufferable mindset that they know best. That more government control in the hands of an elite few is necessary for social progress. When that is taken away, as the GOP has reclaimed the majority, then protests against their agenda is the height of patriotism, but voters turning on them is akin to treason. Okay—maybe not that harsh—but you get the point.