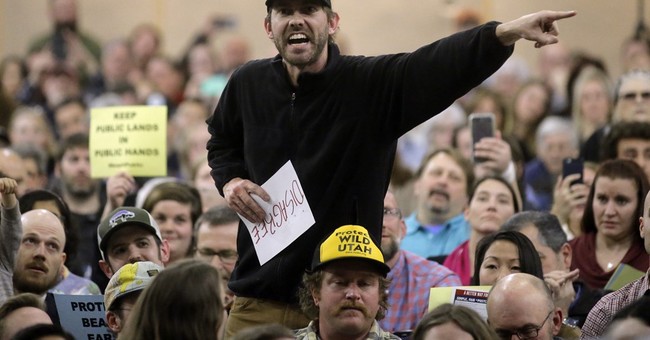 On Friday, February 24, Sen. Bill Cassidy (R-LA) held a town hall event at the Breaux Bridge City Hall. Leaked audio from local news outlet KPEL exposes left wing protesters plotting to create a hostile environment for Cassidy. One of the main goals was to make sure that they dominate the Q&A session to prevent sympathetic questions from being asked or heard. The Daily Caller reported that organizers instructed protesters to blend in with the local constituents (i.e. don’t look like a tree-hugging hippie). The goal was simple: fill the seats and create chaos. The outlet added that local news reported that some locals were turned away due to fire code restrictions.

It was a two-pronged strategy with Cassidy’s town hall, with two teams operating inside and outside of the venue to maximize exposure. The organizer is heard saying that if there are less than 20 people inside, some folks from the outside group should redeploy to inside the hall to fill those seats. They know the media is watching and they want to put on a show for them. Another organizer can he beard instructing members to make sure they spread out, and take the seat closest to the front row. Fill out as many seats as possible and if “the poor people of Breaux Bridge” are sitting behind them, then “tough luck for them,” which drew laughter from the protesters. The Caller reported that one of the organizers on the audio, the one who made the “poor people” comment, has been identified as James Proctor of Indivisible Acadiana, the local chapter of the anti-Trump group that was founded by ex-former Democratic aides, who also a drafted a 26-page document on how to fight back in Trump’s America.

The activists split up into an “inside team” — tasked with occupying “as many seats as we can” and an “outside team,” whose job was to “give [the media] the coverage they want” before joining the others inside. Activists were instructed to dress like conservatives and leave at home “any signifier that you’re a liberal” in order to blend in with constituents.


The leftist activists strategized how best to “dominate” the question-and-answer section of the town hall and keep anyone “sympathetic” to Cassidy from asking a question.

“Game plan number one is to fill as many seats as we can, right? If it’s all of us in there and the poor people of Breaux Bridge are sitting behind us, well then tough luck for them,” said one organizer, identified by KPEL as James Proctor. His “poor people” comment drew laughs from the other activists.

“If we can arrange it so he doesn’t hear one sympathetic question–great. That only magnifies our impact,” Proctor said.

KPEL identified Proctor as the leader of Indivisible Acadiana, a local branch of the national Indivisible organization, which has organized hostile Republican town halls all around the country

The activists can be heard in the audio referencing a partner group’s protest of Sen. Cassidy in Metairie, Louisiana, as a possible source of inspiration. Protesters at that event booed the name “Jesus” during the opening prayer.

Those antics (booing Jesus) are what Guy wrote about last week, where at another Cassidy town hall event—protesters booed the opening prayer and the pledge of allegiance. It’s typical hijinks doled out by liberals, but infuriating all the same. Some Republican lawmakers have alleged that these protesters are paid, which is an unknown factor, but this does appear to be astroturf. Swarm the scene, prevent supportive locals from participating, and create the illusion that deep-red Louisiana is somehow anti-Trump. With more Democrats than ever living in the urban-based areas and along the coasts, the well of supporters isn’t full. In some cases, it wouldn’t shock me one bit if these protesters are bussed in from other areas. The Democratic Party in rural America is simply quite dead. In Appalachia, out of the 490 counties that dot the massive region, Clinton only won 21 of them—and those contained college campuses. Are there Democrats in these regions, yes—but certainly not in the numbers that are inflated by these organized protests at GOP town halls. Does anyone actually think that in less than 100 days, the people of Louisiana, where Trump won with almost 60 percent of the vote, have turned on him? Most of his supporters are staying with him because he is following through on his campaign promises. And the more liberals throw their tantrums, shun people with opposing views, and continue to say how millions of Americans who support Trump are racist and deplorable, the more people flow into the Trump camp. Even moderates who have been on edge are now being pushed towards Trump, sick of being lectured to by an insufferable elite. While these protests appear to be made up of people from the area, does anyone think they would be this vocal and organized without the help from liberals in D.C? The vestiges of the Obama machine (Organizing for Action) have joined forces with Indivisible. Even Rep. Ted Lieu (D-CA) admitted that outside liberal groups are organizing these protests. This isn’t organic. It may last longer than Occupy Wall Street, but I doubt if liberals will reap any political dividends given their diminished state. To retake the White House, Congress, state legislature seats, and reoccupy governor’s mansions, they need to reconnect with white working class voters—you know those “poor people,” who are decidedly in the Trump camp for now. You’re not going anywhere with them by mocking them—and I think they know this already.

For congressional Republicans, they shouldn’t cancel or not hold town hall events. This is part of the job. You have to take the heat. We all knew that liberals would go absolutely crazy if Trump won. This is a taste of it. Rep. Justin Amash (R-MI) has used humor to diffuse tense situation, though he hasn’t backed down on his stances on the issues. Maybe to ensure that everyone has a shot at being heard, and to avoid turning away constituents due to capacity concerns, Republicans should just have these events outside to reduce the layers of astroturf that appears to being laid down at these town hall events. Also, these folks are not talking to the national office...are you kidding me?