North Dakota Pipeline Protesters Not Only Left Mountains of Garbage, They Also Abandoned Their Pets 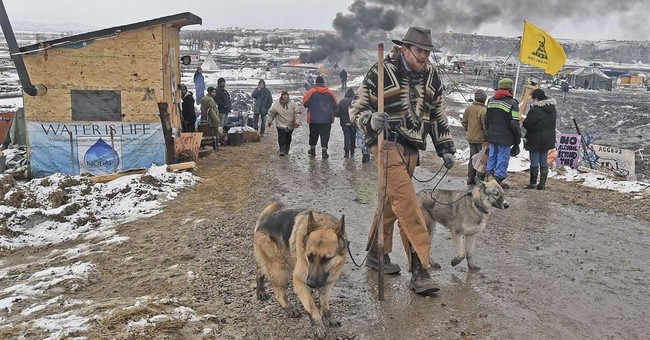 The environmentalists came to North Dakota to protest the construction of the Dakota Access Pipeline and lost. Now, as the cleanup of their protest camp begins, authorities have found it to be a disaster zone. There’s enough garbage and human waste to fill 2,500 pickup trucks. With the ending of the winter months approaching, they fear the spring flooding could wash this waste into the Missouri River, polluting it and other waterways. Yet, efforts to prevent an environmental disaster before the spring have hit another obstacle. Besides leaving heaps of garbage, protesters have left their pets. Now, volunteers at a local animal rescue group—Furry Friends—are conducting searches to make sure there are no more missing animals (via West Dakota Fox):

As officers moved in, and protesters moved out, garbage wasn't the only thing abandoned.

The rescue has been working hard to catch ALL the animals that were left behind at the camp, but Furry Friends Rockin Rescue isn't giving up on these abandoned pets.

Officials continue to work against the clock to clean up the main Dakota Access Pipeline Camp. While protesters are gone, some family members are stuck behind.

Way to treat Mother Earth and its inhabitants, environmental lefties.