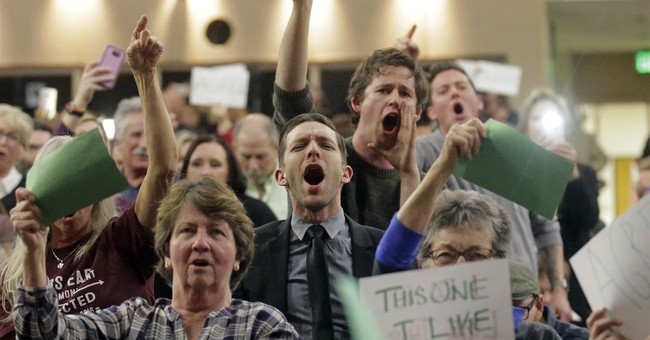 Republicans are under siege by angry protesters. The sea of protests at the their town halls has them on edge. They’re “feeling the wrath” over their agenda. These are the sound bites from the media, specifically the Big Three (CBS, NBC, and ABC) concerning the intense town halls hosted by Republican lawmakers, some of which have led some representative, like Rep. Tom McClintock (R-CA), needing a police escort to leave.

Yes, protesters have voiced their anger at Republicans, who have shown that they don’t have much to offer since there's no consensus over an alternative plan. Also, they should expect more of these exchanges since Congress will be on recess next week. David Nather of Axios had a breakdown of these antics:

Republicans don't have a lot of ready answers when they're asked how sick people will get health coverage if Obamacare is repealed. "That issue will have to be addressed in some form or manner, but it hasn't been addressed yet," Rep. James Sensenbrenner said at a town hall meeting in Wisconsin on Saturday.

Rep. Jason Chaffetz didn't do himself any favors by suggesting the protesters at his town hall last week were paid, without presenting any evidence.

That said, it's not as if there's no organizing to generate a big turnout. Liberal volunteers are spreading the dates and locations of future town halls through activities like the Town Hall Project.

The Washington Post  reported that an Obama super PAC is bussing lefty activists to these events. So, who are these people? Well, they’re former Democratic operatives and aides who are determined to derail the Trump White House (via Politico):

Dubbed “Indivisible,” the group launched as a way for [Angel] Padilla and a handful of fellow ex-Democratic aides to channel their post-election heartbreak into a manual for quashing President Donald Trump’s agenda. They drafted a 26-page protest guide for activists, full of pointers on how to bird dog their members of Congress in the language of Capitol insiders.

The booklet concludes with a stirring promise to fellow Trump enemies: “Good luck — we will win.”

The group isn’t planning to limit itself to the town-hall resistance to repealing Obamacare that it’s becoming known for. Indivisible has marshaled demonstrations against Trump’s Cabinet nominees and his immigration order, and it’s partnering with the organizers of the Jan. 21 Women’s March for a new action next week.

Its handful of senior leaders count about 100 contributors to their national organizing work but insist that all are working on a volunteer basis. They know conservatives are spreading unfounded rumors that their success is being driven by wealthy donors like George Soros, which they flatly deny.

“It doesn’t matter who we take money from — we’re always going to get blamed as a Soros group, even if we don’t take money from Soros,” said Padilla, now an analyst with the National Immigration Law Center. “That’s one of the attacks and that’s fine.”

The group began when Ezra Levin, a former aide to Texas Democratic Rep. Lloyd Doggett, commiserated over the election in late November with his wife Leah Greenberg, a longtime aide to ex-Virginia Democratic Rep. Tom Perriello. The couple was “going through the stages of grief, like a lot of progressives,” Levin recalled in an interview, “and wanted to do what we could to help.”

They got to work on what became the "Indivisible Guide," billed as a set of “best practices for making Congress listen.” The manual borrows openly from the early tactics of the Tea Party, which sprouted on the strength of local conservative resistance to former President Barack Obama’s hefty government stimulus bill and health care reform plan.

“Trump is not popular,” the guide states. “He does not have a mandate. He does not have large congressional majorities. If a small minority in the Tea Party could stop President Obama, then we the majority can stop a petty tyrant named Trump.”

Now, is this the emergence of a left wing Tea Party? The news media is craving for such a movement with liberals. Frankly, it’s too early to tell, but I’m betting that this movement will fail. The Tea Party was organic, it was decentralized, and it wasn’t conjured in the pots owned by the political establishment. Its decentralization was the source of its strength and weakness. Also, if these protesters are mostly from the cities, who cares? Jason Chaffetz was reelected with 73 percent of the vote. You think a couple hundred rabid liberals who don’t live in his district are going to make a difference? No. The Democratic Party is regional, restricted to the cities and the coasts. There’s no room for growth. There’s no outreach of the tens of millions of white working class voters, which is essential for this left wing resurgence to succeed. In fact, forget this left wing Tea Party project—retaking some of the rural areas is essential for the Democratic Party’s survival. The Atlantic’s Molly Ball wrote how it’s too early to see if this morphs into left wing Tea Party, but has seen similarities. At the same time, she also noticed that the regressive Left is demanding Democratic lawmakers to oppose Trump on everything, even policy initiatives traditionally favored by Democrats. Also, this movement could be looking to cannibalize sitting members of Congress for trivial things, like shaking hands with Trump nominees. For a party that’s on life support, I’m not so sure this will turn out well. Yes, the GOP was in horrible shape after 2008—but they had areas where they could actually grow. And they did—winning 63 House seats in 2010, the largest swing since 1948. If Democrats can’t break single digit gains in 2018, this movement is overrated:

It’s too soon to tell if the current resistance movement will follow the Tea Party’s pattern. But there are already many parallels. It has arisen spontaneously and en masse. Many Republicans believe it’s not real: The protests, they tell me, are Astroturf funded by George Soros; the opposition to Betsy DeVos as education secretary, which jammed Senate switchboards, was merely manufactured by the teachers’ unions. But the unions and Soros didn’t start this fire any more than the Kochs started the Tea Party—they’re merely riding the wave in hopes it will advance their goals.

Second, Trump’s election appears to have galvanized a lot of people who weren't previously Democratic activists or politically minded at all. They may have voted Democrat, they may consider themselves “progressive,” but they’re not the Democratic base that donated to politicians and knocked on doors in years past. Commentators on the right have seized on the violent sentiments expressed by some participants as proof the whole movement is composed of frightening extremists.

Third, while Trump’s Cabinet, executive actions, and Supreme Court nominee are sharply and traditionally right-wing, he has an agenda his team believes is truly cross-partisan. Senior White House officials say he is serious about pursuing policies Democrats have supported in the past, like negotiating Medicare prescription-drug prices, a big-spending infrastructure bill, and a more protectionist trade policy. Trump’s team sincerely believes at least some Democrats will put governing above partisanship and go along with these initiatives.

But the movement is already urging Democrats to massively resist, and they are listening. Viral rumors that flatter people’s worst assumptions—that Russia hacked the voting machines, that Trump is invading Mexico, that a picture was doctored to make his hands look bigger—catch fire with a credulous audience before they can be debunked (and persist long afterward). Nancy Pelosi and Bernie Sanders, previously considered pretty left-wing, have been attacked for suggesting they could work with Trump. Senate Minority Leader Chuck Schumer drew left-wing protesters at his offices in Brooklyn. When Delaware Senator Tom Carper hugged Trump’s attorney general nominee, Jeff Sessions, after voting against him, anti-Trumpers demanded a primary challenge.

Let’s rewind back to 2011, with the left wing Occupy Wall Street—that was seen as a counterpart to the Tea Party. What happened to them? The regressive Left has tried this before and failed. We shouldn’t be shocked if they fail again. They’re cause disruption. They’ll protest, but I doubt it will yield political dividends. It will make liberals feel better.

Some Republicans have been able to stand up to the furor of the regressive Left. Politico reported how Rep. Justin Amash (R-MI) was able to blunt most of the anger hurled at him at his town hall through humor, noting that he plans to have a bigger venue at the next one. Yet, the publication added that Amash, who has a libertarian streak, had more room to maneuver. He’s also not a Trump supporter, but that’s not the point. A mix of humor and a steel spine allowed Amash to finish the event strong. He also stayed behind to speak with people who still had questions:

The evening, though, was far from a breeze for Amash. The crowd vocally disapproved of his anti-gun control position, and his call to eliminate the Education Department.

Some showed up to the town hall with a clear agenda. Indivisible — the exploding nationwide group trying to reverse-engineer the tea party movement for progressives — handed out packets instructing constituents what to ask Amash: “If Justin doesn’t give you real answers, call him out for it,” the pamphlet read. “Do not give up the mic until your question is sufficiently answered… Boo when he falls back on regressive values. Record it all… Share it on social media."

Often, Amash pushed back. When one person yelled at him to “overturn Citizens United!” — the Supreme Court ruling that opened the floodgates to more money in politics — Amash just chuckled.

“I receive the least amount of PAC money of almost anyone in Congress,” he shot back. “I receive almost nothing… it’s all publicly filed so see for yourselves.”

Amash effectively defused tensions, though, with jokes about his poor singing and a quip to the liberal crowd that “with Donald Trump in office, I don’t know why you’re such big fans of the federal government!”.

Twenty –five minutes after he was supposed to finish, at least 50 hands were still in the air seeking to ask questions. When the event ended, they lined up to talk to Amash.

So, yes, the protests will continue, but the GOP should not fear people who hate them. And no, if this is a would-be left wing Tea Party event—I think it’s going to fail.