Democratic Senator: How About Putting Both Gorsuch And Garland On The Court? 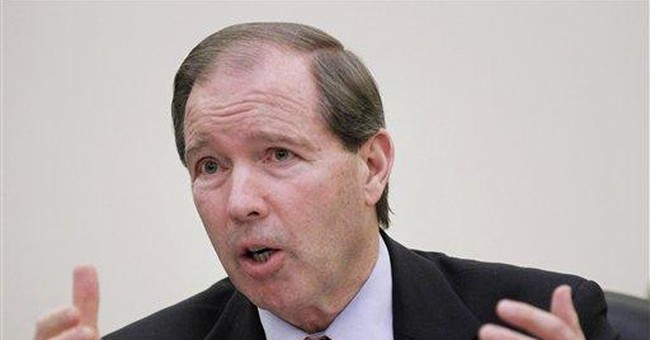 Guy already touched upon Sen. Tom Udall’s past remarks about his distaste for filibustering Supreme Court nominees, but also noted that he spoke with someone who has an ear to the rumblings of the high court and said that Sen. Ted Cruz’s remarks about another vacancy isn’t hot air. Cruz caused a stir at the American Conservative Union’s annual Conservative Political Action Conference, where he said another opening on the Court could be happening sooner rather than later. And Udall had a modest proposal: nominate Merrick Garland for that vacancy and then have the Senate vote on both nominations (via

Sen. Tom Udall, D-N.M., proposed Monday that President Trump should nominate Judge Merrick Garland to the Supreme Court if another vacancy opens up on the bench this year, and have him and Judge Neil Gorsuch voted on simultaneously.

Udall said he raised his idea in a meeting he had with Gorsuch on Monday morning, and told reporters that Trump could prove himself to be the ultimate dealmaker with this maneuver and could help in his mission to unify the country.

Udall didn't say explicitly that Democrats would accept the confirmation of both as part of a political compromise, but did suggest it could work out that way.

It wasn’t confrontational, but the writing’s on the wall: Senate Democrats are still infuriated that Garland, Obama’s pick to fill Scalia’s vacancy, was blocked by Republicans now have a chance to not only maintain the composition of the Court—but tilt it more decidedly conservative over the course of Trump’s presidency. There’s this hubbub about this being a stolen seat, but Senate Republicans used precedent with Garland’s nomination. In 1992, then-Sen. Joe Biden (D-DE) said that no Supreme Court nominations should be considered during an election year. Senate Minority Leader Chuck Schumer went so far as to say that he would block any further Bush Supreme Court nominations should another vacancy occur in 2007. Liberals say this rule doesn’t exist. It does. Sorry—Joe Biden was a senator and he did lay the groundwork. Like with Harry Reid nuking the filibuster rules on non-Supreme Court nominations, the Democrats own myopia has bit them in the backside.

I’m going to make the argument that Garland isn’t qualified, he is. But his nomination has expired. Donald Trump and the Republicans won the 2016 election. We get to dictate who should fill the next vacancy when we reach that juncture—and it certainly isn’t going to be a recycled Obama nominee. I’m sure the conservative base of the GOP will agree. The only difference is that while Neil Gorsuch is expected to be confirmed to the Supreme Court, the second vacancy will be a fight to the death. Senate Democrats are keeping their power dry over a nomination that will tilt the Court to the right. You see that as ten Senate Democrats have voiced their support to give Gorsuch a hearing and a vote, with all of them showing to have zero appetite for supporting a filibuster. It’s a worthy attempt at a compromise I guess, but this Gorsuch/Garland simultaneous confirmation vote scenario seems to be pie in the sky.

Far Left Forces Biden to Cave on a Trump Immigration Initiative, Which Only Shows It Was a Good Policy
Matt Vespa