Treasury Secretary: Trump's Budget Will Have Zero Cuts To Entitlements 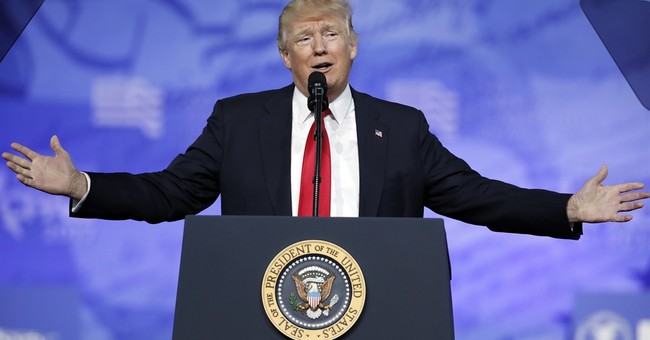 As Katie wrote, President Trump plans big league increases in defense spending, but if there is one huge divide between President Trump’s populism and the conservative base--it's entitlement reform. Trump said that he would protect Social Security and Medicare, which has been used in an ad campaign by the American Association of Retired Persons urging Congress to make the same promise. Also, what times we live in that the AARP has an ad featuring a Republican president in a positive light. Anyway, Treasury Secretary Steve Mnuchin said over the weekend that the president’s first budget proposal wouldn’t be touching entitlement spending (via Reuters):

Mnuchin said Trump would also use a major policy speech to a joint session of Congress on Tuesday night to preview some elements of his sweeping plans to cut taxes for the middle class, simplify the tax system and make American companies more globally competitive with lower rates and changes to encourage U.S. manufacturing.

Speaking on Fox News Channel's "Sunday Morning Futures" program, Mnuchin, who has acknowledged that tax reform is his top policy priority, said the budget plan would not seek cuts to federal benefits programs known as "entitlements."

"We are not touching those now. So don't expect to see that as part of this budget, OK," Mnuchin said of the programs, according to a transcript provided by Fox. "We are very focused on other aspects and that's what's very important to us. And that's the president's priority."

Entitlement spending represents one of the biggest obstacles to the political class. Every day for the next two decades 10,000 baby boomers become eligible to receive Social Security and Medicare. The workforce is barely able to keep up and if economic growth remains anemic, then politics may very well be, as George Will aptly noted, become increasingly gerontocratic. These people, the elderly, vote early and often—and this issue of reform has repeatedly entered the political graveyard for simple reasons. Democrats say Republicans are going to push grandma off the cliff with their reforms, even discussions about it—while Republicans, fearing the walker brigade, seem to enter a state of confusion, thus killing unified support and a solid narrative; the one about the grandparents dying, well that resonates. In 2005, President George W. Bush tried to institute a reform that would allow younger workers to save a portion of their Social Security taxes and place it in a private retirement account. The effort failed, with Bush’s proposal becoming more unpopular the more he talked about it. After Hurricane Katrina, the president faced Democrats lock step in opposition, with the GOP unable to coalesce support around the proposal. Bush admitted defeat.

Baby boomers will have these benefits waiting for them, for Millennials—the future remains uncertain, as the system will soon be crushed by the trillions in unfunded liabilities (over $100 trillion) within the entitlement system. As Will mentioned in a lecture at the U.S. Naval War College in Rhode Island, most boomers retire with less than $50,000 of savings or investment, hence why they’re so vociferous in opposition to reform.

Nevertheless, experts say that Social Security will be around for younger Americans, and that it’s not heading towards bankruptcy. You get a parsing of the language. On one hand, benefits to retirees can continue for decades to come, albeit without meeting all obligations without reforms. By 2034, only 75 cents on the dollar can be covered without reforms. By the end of this decade, the Social Security and Medicare will be spending more than it takes in through payroll taxes. That doesn’t sound like solvency. Maybe more economic growth and job creation will provide a buffer. I don’t know. All we know is that everyone is afraid of touching this issue. With Trump being a right-leaning populist, I guess not touching the welfare state seems typical. And when Social Security was instituted the average time between retirement and death as two years. It’s now over 20, and there were 14 workers for each retiree. The system worked better, but now that figure has dwindled to 2.1 workers per retiree. The system needs to be fixed, with the retirement age in desperate need of being increased. That alone will cause liberal Democrats’ heads to explode. I support the president on border security, his executive orders on national security, job creation, tax reform, and I look forward to seeing what he has in store for NAFTA. But on entitlement reform, he could run aground of congressional Republicans, who have been working to save the social safety net in a responsible manner that just doesn’t end with more spending and meaningless tax increases. This was to be expected, but it’s still disappointing.