Poll: Vast Majority Of Americans Believe Bathrooms Should Be Linked To Biological Sex 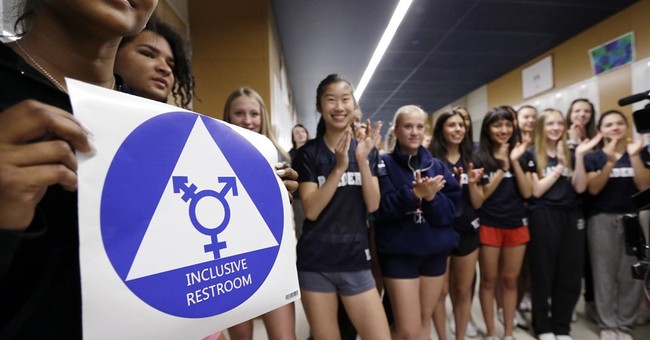 It seems a bit odd that liberals are so focused about making sure bathrooms are safe for everyone, even if it means giving biologically born males access to the women’s locker room/restroom, even though these individuals now identify as female. The same goes for biologically born females who think they’re male. The transgender issue has been brought into the spotlight not only concerning bathrooms, but also the wrestling mat as well. In Texas, Mack Beggs a transgender male won the state championship…in girls wrestling. Texas rules outline that you wrestle based on your birth certificate. Beggs began transitioning a year and a half ago and take testosterone, which drew criticism from other girl wrestlers.

The Left thinks that everyone should just accept this, most Americans may be open to transgender rights, though certainly not when it comes to bathrooms. It’s a rather mixed bag. Yet, in a new poll from the Catholic news site Crux and Marist College, they found that the vast majority of Americans feel that bathroom use should be linked to your biological sex:

Majorities also support the right of doctors and employers to opt out of performing or covering surgery or other treatments intended to change someone’s sex.

By a margin of almost 40 points, a majority of Americans - 66 percent to 27 percent - do not think “someone who is transitioning to become the opposite sex” should be allowed to use whichever showers or locker rooms they want.

By a margin of nearly 20 points, a majority of Americans have the same opinion about bathroom use (56 percent to 38 percent).

Eight in 10 Americans say doctors and other healthcare professionals should not be forced to be involved with operations intended to change someone’s sex, if they disagree with such procedures for religious reasons. Fewer than two in 10 disagree (18 percent).

And by a margin of 30 points (62 percent to 32 percent), Americans believe employers should be legally allowed to opt out of covering medical procedures intended to change a person’s sex on the basis of freedom of religion.