NYT: Oh My God–Trump Picked A Conservative For The Supreme Court 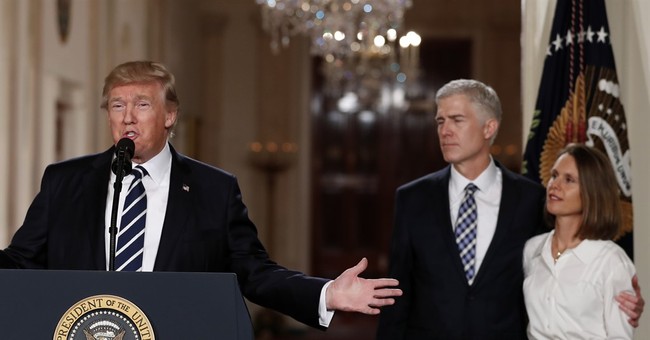 Well, it wouldn’t be a liberal freak-out without The New York Times  editorial board going bananas over the nomination of Judge Neil Gorsuch to the Supreme Court. Apparently, they were disappointed that a) Trump’s nominee wasn’t a moderate; and b) he didn’t pick Merrick Garland. They also fretted about the conservative majority being reconstituted on the high court. Yes, my dear Times—elections have consequences.

First of all, whom do you think Trump was going to nominate? Another Kagan? Another Sotomayor? Another John Paul Stevens? You’d be high on bath salts to think that Trump wouldn’t pick a qualified conservative jurist to fill the vacancy left by the late Antonin Scalia. Oh, and apparently, Garland is more qualified that Gorsuch, despite both men serving on appellate courts. They also noted how Republicans blocking Garland was outrageous, despite Sen. Joe Biden outlining the rules on that front: no Supreme Court nominations should be considered in a presidential election year. If the Left wants to act as if Biden was never senator, go ahead:

The seat Judge Gorsuch hopes to sit in should have been filled, months ago, by Merrick Garland, the chief judge of the Court of Appeals for the District of Columbia Circuit, whom President Barack Obama nominated to the court last March. Judge Garland, a former federal prosecutor and 20-year veteran of the nation’s most important federal appeals court, is both more moderate and more qualified than Judge Gorsuch.

So what might a Justice Gorsuch mean for the court? Like Justice Scalia, he is an originalist, meaning he interprets the Constitution’s language to mean what it was understood to mean when it was written — an approach that has led both men to consistently conservative results.

Given the events of recent days, senators should press Judge Gorsuch on how he would approach constitutional questions that have already arisen out of Mr. Trump’s actions as president, like his order barring refugees and immigrants from seven Muslim-majority countries, or his alleged violation of the Emoluments Clause of the Constitution.

Supreme Court nominations are among the most important decisions a president makes, and certainly the most enduring: A nominee like Judge Gorsuch could sit on the court for more than three decades. At a rally last summer Mr. Trump said: “Even if you can’t stand Donald Trump, you think Donald Trump is the worst, you’re going to vote for me. You know why? Justices of the Supreme Court.” That may have played well on the campaign trail, but Mr. Trump’s failure to choose a more moderate candidate is the latest example of his refusal to acknowledge his historic unpopularity and his nearly three-million-vote loss to Hillary Clinton. A wiser president faced with such circumstances would govern with humility and a respect for the views of all Americans.

It’s annoying that the endless outrage from the Left hasn’t subsided, possibly because their ethos of political correctness has turned them into soft, cry babies who simply cannot tolerate or deal with people holding opposing views. It’s triggering. It doesn’t matter Clinton received three million more popular votes. He won. Clinton lost. Trump gets to dictate the course of the country and the nation. Period. There’s a new sheriff in town. He punches the media in the mouth constantly, which forces op-eds like this, which only help him get that second term.