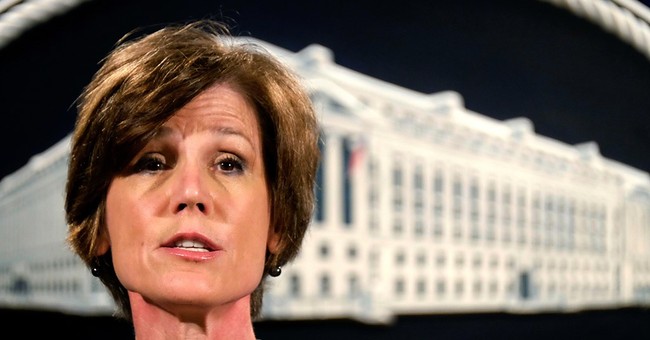 “With her decision not to defend the executive order regarding immigration Sally Yates displayed fierce intellect, unshakeable integrity, and deep commitment to the rule of law that have characterized her 27 years of distinguished service to the Department of Justice under both Democratic and Republican administrations,” said Lynch in a statement. “Her courageous leadership embodies the highest traditions of the Department of Justice, whose first duty is always to the American people, and to the Constitution that protects our rights and safeguards our liberties.”

Holder tweeted that Yates is a “person of integrity with great skill. Her judgment should be trusted.”

Sally Yates: person of integrity/attorney with great legal skill. Has served this nation with distinction. Her judgment should be trusted.

This is what skill, judgment and courage look like. pic.twitter.com/kJ16Cg1h2Q

Here is her full letter [emphasis mine]:

On January 27, 2017, the President signed an Executive Order regarding immigrants and refugees from certain Muslim-majority countries. The order has now been challenged in a number of jurisdictions. As the Acting Attorney General, it is my ultimate responsibility to determine the position of the Department of Justice in these actions.

My role is different from that of the Office of Legal Counsel (OLC), which, through administrations of both parties, has reviewed Executive Orders for form and legality before they are issued. OLC’s review is limited to the narrow question of whether, in OLC’s view, a proposed Executive Order is lawful on its face and properly drafted. Its review does not take account of statements made by an administration or it surrogates close in time to the issuance of an Executive Order that may bear on the order’s purpose. And importantly, it does not address whether any policy choice embodied in an Executive Order is wise or just.

Similarly, in litigation, DOJ Civil Division lawyers are charged with advancing reasonable legal arguments that can be made supporting an Executive Order. But my role as leader of this institution is different and broader. My responsibility is to ensure that the position of the Department of Justice is not only legally defensible, but is informed by our best view of what the law is after consideration of all the facts. In addition, I am responsible for ensuring that the positions we take in court remain consistent with this institution’s solemn obligation to always seek justice and stand for what is right. At present, I am not convinced that the defense of the Executive Order is consistent with these responsibilities nor am I convinced that the Executive Order is lawful.

Consequently, for as long as I am the Acting Attorney General, the Department of Justice will not present arguments in defense of the Executive Order, unless and until I become convinced that it is appropriate to do so.

Trump dismissed her hours after this letter with U.S. Attorney Dana Boente, who said that he would enforce the law, rescinding Yates’ directive. Boente was sworn in as the new acting attorney general at 9 P.M. last night, as Sen. Jeff Sessions’ (R-AL) nomination to be the nation’s top legal enforcer remains in limbo thanks to Democratic obstruction. On a positive note, he’s expected to be confirmed once the Judiciary Committee gives him the nod.

Lawyers Jonathan Turley and Alan Dershowitz ripped the shoddy directive Yates issued, noting that a) the law is constitutional and lawful; b) it references its possible motivations from the 2016 campaign trail which is immaterial; and c) she did this to be a holdover martyr for the Left. Dershowitz noted that it’s not the AG’s job to discern whether a law is just or wise. The job is to defend the law when it’s lawful and constitutional. Both men are opposed to the executive order, but added that Yates had an obligation to resign if she felt this way, and that the president had every right to fire her.

If she wanted to leave with integrity, Yates should have resigned. Instead, she wanted to be a martyr, a “holdover hero,” in the words of Dershowitz.