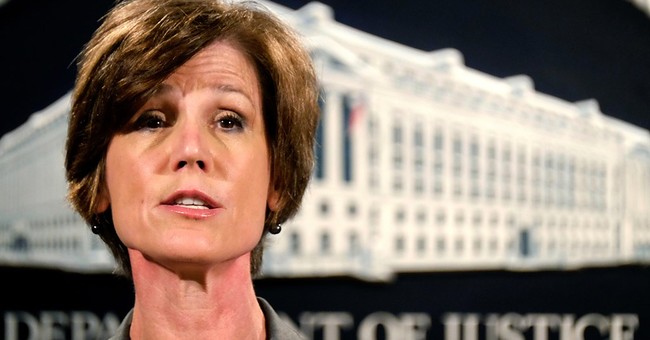 The Democrats are delaying my cabinet picks for purely political reasons. They have nothing going but to obstruct. Now have an Obama A.G.

UPDATE II: Yates has been fired.

With Sen. Jeff Sessions’ (R-AL) attorney general nomination still in limbo, Sally Yates, an Obama holdover that is serving as acting attorney general, ordered the Department of Justice not to defend President Donald J. Trump’s executive order on immigration. In the letter, Yates noted that she was not convinced that the order was legal (via NYT):

Acting Attorney General Sally Q. Yates, a holdover from the Obama administration, ordered the Justice Department on Monday not to defend President Trump’s executive order on immigration in court.

“I am responsible for ensuring that the positions we take in court remain consistent with this institution’s solemn obligation to always seek justice and stand for what is right,” Ms. Yates wrote in a letter to Justice Department lawyers. “At present, I am not convinced that the defense of the executive order is consistent with these responsibilities nor am I convinced that the executive order is lawful.”

“For as long as I am the acting attorney general, the Department of Justice will not present arguments in defense of the executive order, unless and until I become convinced that it is appropriate to do so,” she wrote.

This course of action will be reversed once Sessions is confirmed as attorney general. That is a forgone conclusion, but for the time being—the Department of Justice will remain on the sidelines concerning defending this directive from the Trump White House.The order’s most controversial portion limited immigration (a 120-day moratorium) from seven predominantly Muslim countries, though it’s dishonest to say it’s a straight up Muslim ban. It’s also legal.

Even Lawfare Blog, which ripped the order, admitted that the “malevolent” aspects of this order are “certainly achievable within the president’s lawful authority.” They also added that the executive’s power on admitting refugees is “vast.” Lawyers Dan McLaughlin and Andrew C. McCarthy also noted that Trump’s executive order is legal and well within his constitutional authority, though McLaughlin did comment that it’s somewhat disconcerting that national policy is shifting away from America’s long-standing tradition of accepting refugees. On the other hand, he noted that what Trump is doing is not a major departure from what the Obama administration did:

Obama-administration policy effectively discriminated against persecuted religious-minority Christians from Syria (even while explicitly admitting that ISIS was pursuing a policy of genocide against Syrian Christians), and the response from most of Trump’s liberal critics has been silence

Liberals are normally the first people to argue that American policy should give preferential treatment to groups that are oppressed and discriminated against, but because Christians are the dominant religious group here — and the bêtes noires of domestic liberals — there is little liberal interest in accommodating U.S. refugee policy to the reality on the ground in Syria. So long as Obama could outsource religious discrimination against Christian refugees to Jordan and the U.N., his supporters preferred the status quo to admitting that Trump might have a point.

On the whole, 2016 was the first time in a decade when the United States let in more Muslim than Christian refugees, 38,901 overall, 75 percent of them from Syria, Somalia, and Iraq, all countries on Trump’s list — and all countries in which the United States has been actively engaged in drone strikes or ground combat over the past year. Obama had been planning to dramatically expand that number, to 110,000, in 2017 — only after he was safely out of office. This brings us to a broader point: The United States in general, and the Obama administration in particular, never had an open-borders policy for all refugees from everywhere, so overwrought rhetoric about Trump ripping down Lady Liberty’s promise means comparing him to an ideal state that never existed. In fact, the Obama administration completely stopped processing refugees from Iraq for six months in 2011 over concerns about terrorist infiltration, a step nearly identical to Trump’s current order, but one that was met with silence and indifference by most of Trump’s current critics.

The American tradition of accepting refugees and asylees from around the world, especially from the clutches of our enemies, is a proud one, and it is a sad thing to see that compromised. And while Middle Eastern Christians should be given greater priority in escaping a region where they are particularly persecuted, the next step in this process should not be one that seeks to permanently enshrine a preference for Christians over Muslims generally. But our tradition has never been an unlimited open-door policy, and President Trump’s latest moves are not nearly such a dramatic departure from the Obama administration as Trump’s liberal critics (or even many of his fans) would have you believe.