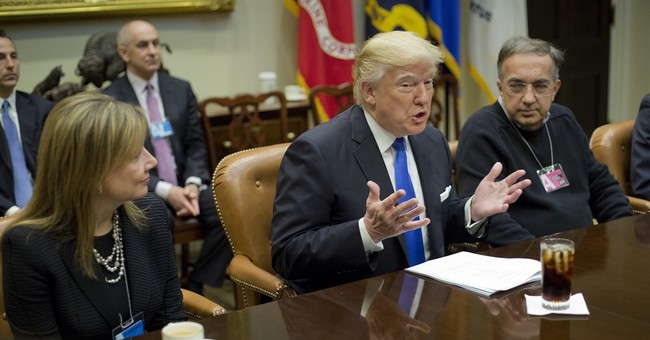 President Donald J. Trump promised to bring the jobs back, even threatening to impose a 35 percent tariff on foreign goods in order to renegotiate trade deals he feels are unfair and have robbed the American working class. It’s all part of bringing the parties to the bargaining table. On Tuesday, the president had the automobile industry at the White House, where he outlined an agenda that called for more car production in the U.S., more plants, and therefore, more jobs. At the same time, there could be some hesitancy on behalf of the auto industry to construct new plants, as it costs $1 billion to build—and auto sales in the U.S. have mostly plateaued. Still, Trump feels that he can bring jobs back and sustain them through gutting of expensive regulations and tax reform (via Reuters):

U.S. President Donald Trump urged the chief executives of the Big Three U.S. automakers on Tuesday to build more cars in the country, pressing his pledge to bring jobs to America and discourage the car industry from investing in Mexico.

In return, the new Republican president has vowed to cut regulations and taxes to make it more attractive for businesses to operate in the United States. He promised during his campaign to be a job-creating president and stressed that message in his inaugural address last Friday.

"We have a very big push on to have auto plants and other plants - many other plants," he told reporters at the start of the meeting. "It's happening. It’s happening big league."

Kristin Dziczek, an analyst at the Michigan-based Center for Automotive Research, said automakers still had excess capacity in North America after suffering in the 1990s and 2000s from overcapacity and shifts in market share.

Yet, Reuters added that General Motors would invest $5 billion through 2018, though they also slowed the production of small cars, which gutted about 2,000 jobs.

On Monday, Trump met with labor union leaders, who came away with the impression that this White House is committed to infrastructure (via NYT):

At a meeting with the leaders of several construction and building trade unions, President Trump reiterated on Monday his interest in directing hundreds of billions of dollars to infrastructure investments, some of it from the federal government, union officials said.

“That was the impression I was taken away with,” said Sean McGarvey, the president of North America’s Building Trades Unions, an umbrella group, on a call with reporters after the meeting. “That the American citizenry and the American Treasury will be invested in building public infrastructure.”

Mr. McGarvey added that Mr. Trump clearly felt that much of the money should come from the private sector and that some of the investments could take the form of public-private partnerships, an idea the president floated as a candidate.

“We just had probably the most incredible meeting of our careers with [President Donald J. Trump],” he added.