He Went There: Sen. Leahy Asks Sessions If Grabbing A Woman's Genitals Is Sexual Assault 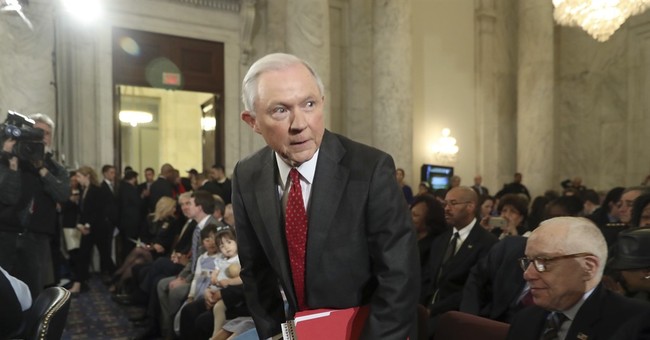 Well, day two of Sen. Jeff Sessions’ (R-AL) attorney general confirmation hearing is set to begin. Yesterday the Senate Judiciary Committee rehashed the old allegations of racism lobbed against Sessions, who faced the same committee in 1986 when he was nominated for a federal judgeship. Those allegations sunk that nomination, but it appears he’s going to be confirmed for attorney general, though Democrats plan to drag him through the sewer beforehand.

Towards the end of the first day of hearings, Sen. Patrick Leahy (D-VT) brought up sexual assault, specifically due to Donald Trump’s lewd remarks about women caught on a hit mic moment featured in an Access Hollywood tape that created a firestorm in the final weeks of the 2016 campaign (via CNN):

.@SenatorLeahy: "Is grabbing a woman by her genitals without her consent sexual assault?" Yup, he went there. (Sessions said "yes")

Attorney General-designate Jeff Sessions was asked Tuesday about President-elect Donald Trump's infamous hot-mic comments in which he boasted about being able to sexually assault women and get away with it.

The 2005 "Access Hollywood" conversation, which leaked during the 2016 election, featured Trump making lewd and sexually aggressive remarks about women. In the recording, Trump said he could grab women "by the pussy" and that he would sometimes "just start kissing them."

Vermont Sen. Patrick Leahy asked Sessions about the conversation during the Alabama Republican's confirmation hearing and if he thought what Trump described amounted to sexual assault.

"Is grabbing a woman by her genitals, without consent, is that sexual assault?" Leahy asked during the hearing.

"Clearly, it would be," Sessions responded.

It’s obviously a vast improvement from the answer he gave to The Weekly Standard in October when the tape was released to the public. And he’s right—that is the textbook definition of sexual assault. Now, if you were confused with this weird turn in questioning by Leahy, to the circling back to the Voting Rights Act, and getting into the weeds about tribal law—you’re not alone. It was a symptom of the Democrats not really knowing what to do because they know Sessions is going to become out next attorney general Byron York of The Washington Examiner described Senate Democrats today as “sluggish and without focus.”

The Democratic questioners were sluggish and without focus; with one exception, their questions lacked the sting of an opposition party that really wants to bring down a nominee. And the protesters — well, they just didn't bring their A game.

During breaks, the people who helped Sessions get ready for the confirmation noted that there had not been any questions Sessions had not anticipated or prepared for. That preparation showed. Yes, on the one hand, Democrats weren't sharp. But on the other hand, Sessions smoothly handled questions that might have tripped up a less-prepared nominee.

[Sen. Al] Franken [D-MN] based much of his questioning on a recent op-ed in the Washington Post headlined "We know Sessions is overstating his record," by three former Justice Department civil rights lawyers. Franken's issue seemed to be that Sessions had said he had "handled" the cases when in fact his name was on the legal filings but he might not have been active in other aspects of the case. Franken noted repeatedly that he, Franken, is not a lawyer, and indeed, he did not seem to appreciate the role U.S. attorneys play in cases pursued by their offices.

Franken's attack was also undermined a bit by the fact that one of those former Justice Department lawyers who wrote the Post piece, Gerald Hebert, had been mistaken back in 1986 in one of the key accusations he lodged against Sessions. A little later in the hearing, Sen. Ted Cruz used some of his time to remind the committee that Hebert had had to recant part of his testimony.

In the end, even Franken admitted that there was nothing Sessions said today that would be disqualifying. The Judicial Crisis Network’s Carrie Severino, who was at the hearing, noted that Sessions being named as lead lawyer on those filed cases is a big deal since he’s ethically responsible for the case holding water. Second, she noted that with moderate Republican Sen. Susan Collins’ (R-ME) defense of Sessions, his confirmation is more or less guaranteed. Like York, she also noted how Sessions just downright owned the hearing yesterday, deflecting or neutralizing almost everything the Democrats threw at him, which wasn’t much.

Has @SenatorSessions done anything that makes him unqualified for the job of attorney general? @SenFranken: “No.” -FTR @MSNBC

Being lead lawyer on briefs is a big deal - he ethically is responsible for and has to be able to stand by everything in them.

Dems underestimated Sessions. He disarmed their gotchas by insisting he would follow the law and hold POTUS constitutionally accountable.

With Senator Collins so adamantly defending Sessions it's obvious he'll be confirmed easily. Won't stop the Dems tantruming, though.

Today could different since Sen. Cory Booker (D-NJ) and Rep. John Lewis (D-GA) will be testifying against Sessions’ nomination. Regarding Booker, it’s unprecedented that a sitting senator would testify against a fellow colleague. Then again, it appears as if Booker is setting the ground for his 2020 presidential run.

Sessions: If there is a violation of Const or VRA the AG has responsibility to intervene. We cannot allow the erosion of the right to vote.