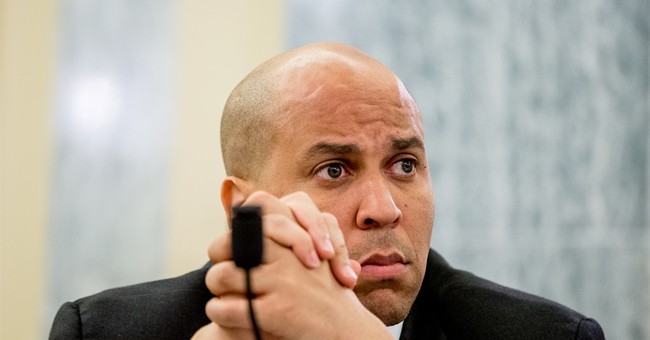 Wow. @CoryBooker testimony against Sessions will be 1st time sitting senator has gone against another sitting sen for Cabinet, per historian

Cortney is covering the Sen. Jeff Sessions’ hearing on his attorney general nomination, but there will be an unprecedented event during these proceedings: Sen. Cory Booker (D-NJ) will testify against Sessions. It will be the first time in U.S. history that a sitting senator will testify against a fellow colleague (via The Hill):

Booker said Monday night he does not "take the decision lightly" to speak against a fellow senator, but he believes Alabama Republican's positions on myriad of issues are "deeply troubling."

"Senator Sessions’ decades-long record is concerning in a number of ways," said Booker. "The Attorney General is responsible for ensuring the fair administration of justice, and based on his record, I lack confidence that Senator Sessions can honor this duty."

The New Jersey Democrat, who is black, explained the unprecedented step by pointing to Sessions' opposition to a bipartisan criminal justice reform bill that Booker has been involved with since joining the Senate, as well as his views on reforming drug policy, his opposition to comprehensive immigration reform and his "failure to defend" minority groups, women and LGBT Americans.

Cory Booker on unprecedented move to testify against Sessions during AG hearings: "These are extraordinary times." https://t.co/VdbO9zuChF

Booker told MSNBC’s Chris Hayes that he will testify either today or tomorrow; Sessions’ hearing will be a two-day event. I guess one could see why Booker might do this. He’s worked on criminal justice reform legislation with Sen. Mike Lee (R-UT)—and Sessions is not supportive of that movement. But I think the New York Post’s Seth Mandel hit it on the head:

Sadly, Sessions will find himself facing the same allegations that sunk his 1986 federal judgeship nomination. During the his Q&A with Sen. Dianne Feinstein (D-CA) Sessions once again reiterated his record of supporting civil rights legislation that desegregated schools while serving as a U.S. Attorney, along with taking on the Alabama Ku Klux Klan and pushing for the death penalty for the leader of that heinous organization who kidnapped and murdered a black teenager. That legal battle paved way for a civil lawsuit that cost the Alabama KKK $7 million, effectively knee-capping that group. Sessions also reiterated the late Sen. Arlen Specter (D-PA), who voted against Sessions’ judicial nomination in the 1980s and came to regret it, saying that it was the only vote that he regretted as he came to see Sessions as an egalitarian.

Yet, while the character assassination will be brutal, he’s going to be confirmed by the Senate. We can thank Harry Reid for changing the rules that allows confirmation of presidential appointees by a simple majority.