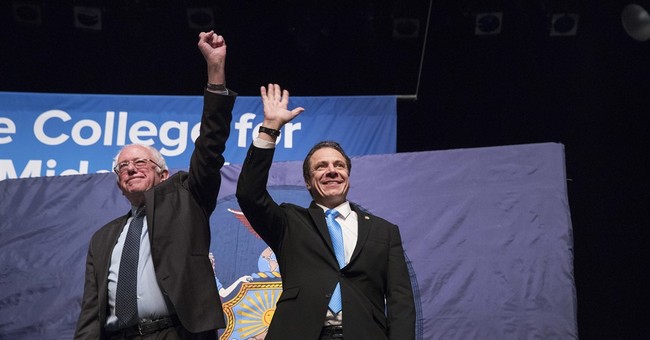 Well, we could be seeing Democratic New York Gov. Andrew Cuomo laying the groundwork for a possible 2020 presidential run with his latest college initiative that takes a chapter from Sen. Bernie Sanders’ free college playbook. The governor announced yesterday that students from families who earn $125,000 a year or less will have their tuition costs covered at any state college. Hillary Clinton voiced approval for the initiative (via NYT):

Gov. Andrew M. Cuomo seized on a potent issue that energized younger Democrats during the presidential race, pledging on Tuesday to cover tuition costs at state colleges for hundreds of thousands of middle-and low-income New Yorkers.

Under the governor’s plan, college students who have been accepted to a state or city university in New York — including two-year community colleges — would be eligible, provided they or their family earn $125,000 or less a year.

Mr. Cuomo hopes for a quick start for his idea, with a three-year rollout beginning in the fall, with a $100,000 income limit, rising to $125,000 by 2019, a timetable the administration billed as more speedy than the one embraced by Mrs. Clinton during her presidential campaign. (On Twitter, Mrs. Clinton said she was “delighted” by the governor’s proposal, calling it a plan that she and Mr. Sanders had “worked hard on.”)

The Times added that the state still doesn’t have solid numbers on how much this will cost, or how many students plan to participate. For the latter, the soft number affords one million families to reap the benefits of this new program, though the Cuomo administration says that the real number will hover around 200,000. It’s one of the many items of the progressive checklist that Cuomo has taken care of during his time occupying the governor’s mansion.

Elected in 2010, Cuomo signed gay marriage into law in 2011, expanded late-term abortion rights in 2013, expanded gun control on 2013, and now is tackling the progressive left’s favorite education item: free college. Wouldn’t shock me if he does decide to challenge President Trump in 2020.