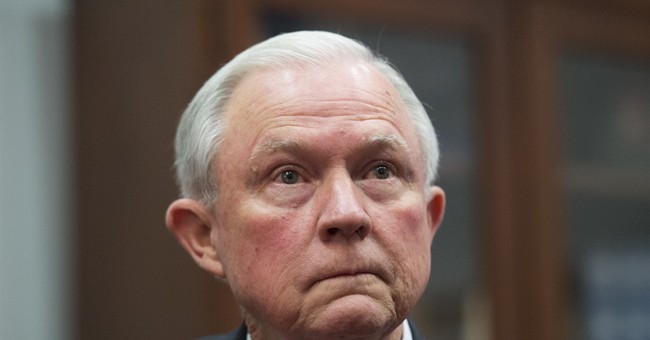 Sen. Jeff Sessions (R-AL) has been nominated to serve President-elect Donald Trump as Attorney General. That’s driving liberal mad, given to the erroneous allegations that he’s a racist. Nevertheless, as Christine noted yesterday, the NAACP staged a sit-in in his Mobile, Alabama office unless Sessions withdraws his nomination or they get arrested. NAACP President Cornell William Brooks tweeted a photo of their protest yesterday afternoon. And yes, they did get arrested (via CNN):

An NAACP sit-in to protest the nomination of US Sen. Jeff Sessions as US attorney general ended late Tuesday when six people were arrested at Sessions' Mobile, Alabama, office.

The arrests of five men and one woman included NAACP President Cornell W. Brooks, said Malik Russell, director of communications for the civil rights group. They face charges of criminal trespass in the second-degree, according to Mobile police.

The protesters arrived earlier Tuesday and said they would stay until Sessions is no longer the nominee or they were arrested.

"We are asking the senator to withdraw his name for consideration as attorney general or for the President-elect, Donald Trump, to withdraw the nomination," Brooks said Tuesday afternoon from Sessions' office.

Despite the Left viewing Sessions as the spawn of Satan, he fought to desegregate schools and took on his state’s Ku Klux Klan chapter, calling that the leader of the chapter be put to death for the murder of a black teenager. It paved way for a $7 million civil verdict against the Alabama KKK, gutting it. Mark Hemingway of The Weekly Standard noted this when the Alabama senator was formally nominated. The allegations of racism were grounded in his failed 1986 federal judgeship nomination, where he allegedly make racially insensitive remarks while serving as a U.S. Attorney. The late Sen. Arlen Specter (D-PA), who was a Republican at the time, voted down Sessions’ nomination, but later regretted the vote. Adding that once he worked with Sessions after he was elected to the U.S. Senate, he came to see the man as an egalitarian.