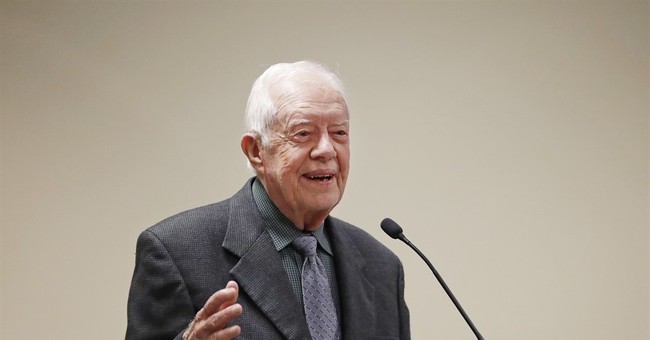 If there’s one thing that’s not going to be on President Obama’s mind prior to leaving office, it’s recognizing the Palestinian State. Nevertheless, former President Jimmy Carter decided to ask anyway before Obama’s departure date on January 20. Of course, Carter praised Obama for his work toward a peaceful solution in the Middle East (it’s actually a disaster over there, but whatever), but warned that this could be undone with President-elect Donald J. Trump. He made this plea in The New York Times on November 28:

That prospect is now in grave doubt. I am convinced that the United States can still shape the future of the Israeli-Palestinian conflict before a change in presidents, but time is very short. The simple but vital step this administration must take before its term expires on Jan. 20 is to grant American diplomatic recognition to the state of Palestine, as 137 countries have already done, and help it achieve full United Nations membership.

The primary foreign policy goal of my life has been to help bring peace to Israel and its neighbors. That September in 1978, I was proud to say to a joint session of Congress, “Blessed are the peacemakers, for they shall be called the children of God.” As Mr. Begin and Mr. Sadat sat in the balcony above us, the members of Congress stood and applauded the two heroic peacemakers.

I fear for the spirit of Camp David. We must not squander this chance.

The Camp David Accords was a groundbreaking peace treaty between Egypt and Israel, in which the former recognized the latter’s right to exist—with Israel promising to withdraw from the Sinai Peninsula, which was seized during the 1967 Six-Day War. Carter should know that this is never going to happen. There’s no way Obama is going to alter our Middle East policy in this way as he’s about to make his exit. Moreover, a Trump White House could rescind recognition. The president isn’t even going to issue a blanket pardon to 750,000 illegal immigrants who are in his deferred action program, which is something that he could do concerning those who have committed crimes while in the United States; something that could make things easier for those seeking to apply for legal status. If he’s not going to do this, which would still bring considerable scrutiny, he’s certainly not going to push hard for the recognition of Palestinian statehood.