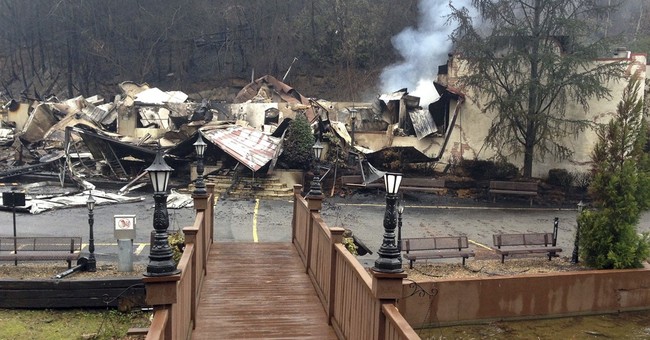 These past few days have really shown us the nasty side or progressivism. The whining, the rioting, and the incessant temper tantrums are one thing; jumping for glee that people’s livelihoods and communities were ruined is another. And it cost one Alabama man his job for making nasty remarks concerning the forest fire in Gatlinburg, Tennessee. Apparently, the people of Gatlinburg deserved this natural disaster because they live in a “cesspool of consumerism” and that they’re all “cousin-humpin…Trump-suckin' pond scum.” He prides himself as being a liberal elitist, who is now out of a job at the Express Oil Change and Tire Engineers (AL.com):

On Nov. 29, Coleman Bonner of Wessington in Chilton County posted a message to his personal Facebook page in regards to the wildfires in Gatlinburg, Pigeon Forge and Sevier County, Tennessee.

"Funny story. I was recently in Gatlinburg. Had a terrible time. I felt the place was a cesspool of consumerism and a bastion of the worst aspect of southern culture. Turns out a wildfire just burned most of the town to the ground. Good riddance, Gatlinburg. And good luck you mouth-breathing, toothless, diabetic, cousin-humpin,' mountain-dew chugging, moon-pie-munchin,' pall-mall smoking,', Trump-suckin' pond scum. (Chuckles and smiles like the smarmy liberal elitist I am," Bonner wrote.

The post came just days after as many as 14,000 people were evacuated from Gatlinburg and the surrounding area after a wildfire on the Great Smoky Mountain National Park's Chimneys Top 2 Trail spread into the tourist town. As many as 17,000 acres have burned, 1,700 structures have been damaged or destroyed and 14 people have died as a result of the blaze.

In most situations, you should feel bad for when someone loses their job. When they do so in this manner, which was utterly preventable because this isn’t the first time someone has lost their job for saying awful things on social media—it’s not as terrible. You shouldn’t feel bad when bad things happen to bad people.