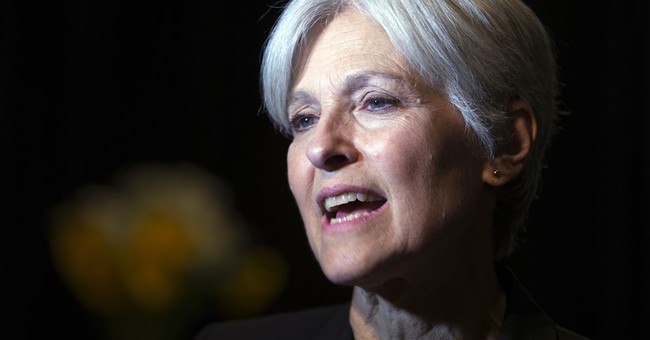 Well, Green Party candidate Jill Stein has decided to pull the plug on her effort to get a statewide recount in Pennsylvania. It seems she didn’t have the money (via CBS Pittsburgh):

The Green Party is dropping its court case seeking a recount of Pennsylvania’s Nov. 8 presidential election. It had wanted to explore whether voting machines and systems had been hacked and the election result manipulated.

Stein had missed the voter-initiated recount deadline, which was on November 21. The only course of action would be for her to challenge the results in court, which would mean her lawyers would have to present evidence of massive voter fraud or hacking that tilted the election towards President-elect Donald Trump. There is no evidence to suggest our election was hacked on November 8.

Prior to this development, Philadelphia approved a recount, but rejected the request to have an audit of the voting machines (via Philadelphia Inquirer):

Ilann Maazel, an attorney for Stein's campaign, told the commissioners the state Election Code allows for an examination of the machines. Citing examples of hacking of elections computer systems in Illinois and Arizona, along with the Democratic National Committee's emails, he said a forensic audit of Philadelphia's voting machine software was the only way to determine whether they had been hacked.

"To examine means to look inside," Maazel said.

Lawrence Tabas, general counsel for the Pennsylvania Republican Party, countered that Stein's campaign had an opportunity for a public inspection of the city's voting machines before the election and chose not to attend.

Tabas cited an Oct. 20 statement from Pennsylvania Secretary of State Pedro Cortes, a Democrat, who said the state's "voting systems are secure" and the machines were not connected to the internet or each other.

Stein's campaign has not offered proof of election tampering, instead relying on affidavits from computer scientists who put forward the theory that voting machines are vulnerable to hacking.

Trump’s lead Over Clinton has been reduced to 49,000 votes after provisional and absentee ballots were recorded (via NBC Philadelphia):

Out of 6 million votes cast in Pennsylvania, the latest tallies put Trump's lead at 0.8 percent. State law would've required an automatic statewide recount if the lead was within 0.5 percent.

In the meantime, President-elect Trump’s legal team, with other supporters, filed challenges to stop the recounts in Michigan, Pennsylvania, and Wisconsin (via NYT):

President-elect Donald J. Trump and his allies have filed separate legal challenges in Michigan, Pennsylvania and Wisconsin in a suddenly robust effort to stop the presidential election recount efforts there.

None of the challenges immediately derailed the recounts in those states, but they promised to complicate them with more legal wrangling by Mr. Trump, groups supportive of him, state officials and Jill Stein, the Green Party presidential candidate. Ms. Stein initiated the recounts and a successful fund-raising drive after suggesting that voting machines were susceptible to hacking.

Michigan Attorney General Bill Schuette also filed a lawsuit, claiming the process would unnecessarily cost the taxpayers millions of dollars among other things. We all know the results will not be changed with these recounts. Trump won. Period.

Oh, and over at Hot Air, Ed had the results from the Wisconsin recount so far [emphasis mine]:

Its Day 3 results show that almost a third of Wisconsin precincts have completed their recounts, accounting for over 705,000 of the 2.975 million ballots cast in the presidential race. The net change has been to find 349 additional votes. Trump has gained 138 votes and Hillary Clinton 126, which means that Trump has extended his lead by 12 points. That’s, er, not exactly what Stein promised donors who coughed up millions for this stupid and futile gesture.

Stein has already raised more money fro this clown show recount effort than for her entire presidential campaign. She said that any money that’s raised beyond the $7 million goal would go to promoting voter integrity and electoral reform changes; something they could run on in 2020.

Also, Clinton got more votes from the Philly area since more people voted in 2016 than 2012. Clinton lost the state because she was a terrible candidate who had a terrible campaign operation. She lost. Get over it.

Debating whether to publish the full memo the Clinton campaign sent me in June arguing why PA wasn't a swing state/worth investing in.