The President-Elect Should Steer Clear Of Gen. Petraeus 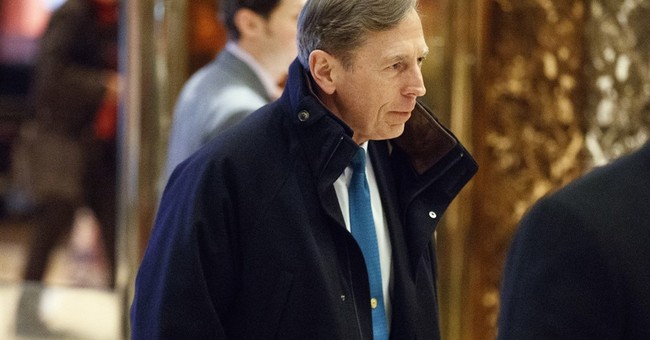 Listen, I’m not a hater of Gen. David Petraeus. He is one of the finest military officers this nation has produced. He’s also a man who was convicted of mishandling classified information. Guy mentioned this at the end of his post about the intrigue that’s brewing over Mitt Romney possibly becoming our next secretary of state. It seems Gen. Petraeus could be considered to be our top diplomat. This could be all a trolling game, but should this actually be a legitimate option (and I hope it isn’t), let’s just rehash that one of the most effective ways Trump and the GOP undercut Hillary was through her unauthorized and unsecure email server that contained classified information. Yes, Trump and others may have outright said that Clinton broke the law. It’s very well a possibility, but for controversial reasons she was not charged by the Justice Department, a decision that reportedly put the FBI agents in charge of investigating Mrs. Clinton at odds with Director James Comey. Frankly, the notion that Clinton possibly put our national security at risk wit this email arrangement because she thought she plays by a different set of rules was enough to send her trust and honesty numbers sinking.

So, we’re now going to put a man who was actually convicted of mishandling classified information into a position where he would be handling…classified information? The optics of this is terrible—and Trump is not that dumb. There are many people who are qualified to lead the State Department, David Petraeus is one of them, but let’s not give an easy win for Democrats with this pick. For starters, they and their friends in the media would have a field day with the hypocrisy of the nomination. Second, it will rehash the rather ignominious way Petraeus’ public service career ended when it was revealed he share classified information with his mistress (via WaPo 4/23/15):

Petraeus, who admitted he provided the materials to his former mistress and biographer, will instead face a two-year probationary period. U.S. Magistrate Judge David Keesler also imposed a $100,000 fine — more than double the amount recommended by prosecutors — to reflect the “seriousness of the offense.”

The plea follows a high-profile investigation and prosecution that triggered Petraeus’s resignation from the CIA in 2012. As part of an agreement with prosecutors, he admitted that he improperly removed and retained highly sensitive information in eight personal notebooks that he gave the biographer, Paula Broadwell, to read.

When FBI agents confronted him in his CIA office in October 2012, Petraeus said he had never provided classified information to Broadwell, prosecutors said.

Making a false statement to a federal law enforcement agent during an investigation is a felony, a crime punishable by up to five years in prison.

Now, there was the rather colorful claim that Petraeus hid these sensitive documents in his attic insulation. FBI Director Comey said he misspoke on that when he was brought to the Hill to testify about the FBI’s investigation into Clinton’s email server (via AP):

Later, during his testimony on Hillary Clinton's email server, Comey said his staff told him he had misspoken.

Comey said his staff told him that Petraeus didn't hide materials in his attic insulation, but that investigators found classified material in an unlocked drawer of a desk in a ground-floor study.

Comey made the disclosure to argue the point that the case of Petraeus, who knew he had top secret information and lied to the FBI about it, differed from the investigation into Hillary Clinton's handling of classified information.

Yeah, that last part is debatable. Three emails were deemed classified when they were sent and received, but they were improperly marked—and Comey did sort of mention that maybe Clinton didn’t know that the “c” markings meant classified. In other words, Clinton, who as our secretary of state is an original classification authority, didn’t know what was sensitive and what was not. It’s just incredible, but enough about Clinton. Petraeus said that the president-elect has a firm grasp of the challenges facing America abroad. Yet, we also have to look at former New York Mayor Rudy Giuliani and Mitt Romney. The former has some business dealings with Qatar and lucrative speaking engagements. The latter is a staunch Never Trump advocate who said that the real estate mogul would bring trickle down racism. There are rumors that Romney would need to apologize like a dog to get the job. Giuliani reportedly said it was the only position he was interested in. Sen. Bob Corker (R-TN) is set to speak with the president-elect today about secretary of state as well.

I’m hedging that this is a troll game, that Trump doesn’t want to fall into their unforced error of opening the floodgates for his enemies to have an easy win in his cabinet picks. Petraeus was a fine solider, leader, general, and could’ve been a great CIA director, but he torpedoed his won career when he decided to get too close to his biographer. There are other equally solid picks out there; Petraeus should be shown the door with respect.