Rampage: Trump Tears Into Media Giants During Meeting, 'Like A F**king Firing Squad' 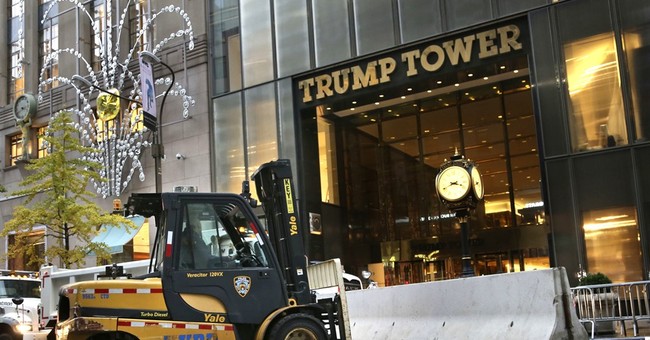 Donald J. Trump’s supporters gave members of the media hell, and now the president-elect had his chance to rip the media in a meeting arranged by campaign manager Kellyanne Conway that occurred earlier this afternoon. CNN reported that that the five major news networks, their executives, and top anchors met with the president-elect at Trump Tower, where Conway said the gathering was cordial:

The meeting was off the record, meaning the participants agreed not to talk about the substance of the conversations.

But a source in the room said there was "real progress" made with regards to media access to Trump and his administration.

A second participant affirmed this and said the journalists spoke with Trump about the importance of the "press pool," a small group of journalists that traditionally travels with the president.

Conway said the meeting was "very cordial, candid and honest."

While there was "no need to mend fences," she said, "from my own perspective, it is great to hit the reset button, it was a long, hard-fought campaign."

Yet, Daniel Halper, formerly of The Weekly Standard, and Emily Smith of The New York Post reported that sources told them the meeting was a total disaster, with President-elect ripping into CNN president Jeff Zucker, saying his network was full of liars, that he hated CNN, and that he should be ashamed of himself. In fact, he accused pretty much everyone in the room of being a liar:

“It was like a f–ing firing squad,” one source said of the encounter.

“Trump started with [CNN chief] Jeff Zucker and said ‘I hate your network, everyone at CNN is a liar and you should be ashamed,’ ” the source said.

“The meeting was a total disaster. The TV execs and anchors went in there thinking they would be discussing the access they would get to the Trump administration, but instead they got a Trump-style dressing down,” the source added.

A second source confirmed the fireworks.

“The meeting took place in a big board room and there were about 30 or 40 people, including the big news anchors from all the networks,” the other source said.

“Trump kept saying, ‘We’re in a room of liars, the deceitful dishonest media who got it all wrong.’ He addressed everyone in the room calling the media dishonest, deceitful liars. He called out Jeff Zucker by name and said everyone at CNN was a liar, and CNN was [a] network of liars,” the source said.

“Trump didn’t say [NBC reporter] Katy Tur by name, but talked about an NBC female correspondent who got it wrong, then he referred to a horrible network correspondent who cried when Hillary lost who hosted a debate – which was Martha Raddatz who was also in the room.”

Halper and Smith added that The New York Times’ publisher Arthur Sulzberger is expected to meet with the president-elect on Tuesday. After the election, the Times decided it would rededicated itself to honest reporting, though they added that they felt their reporting of the 2016 election was fair. I’m sure you all disagree vehemently to that statement. Nevertheless, I still read the Times to get the other side, but the point is to read their articles with that mindset.

If the meeting went down in the manner described in The New York Post, it would be the popcorn moment Trump supporters have been waiting for months, given the overwhelmingly negative coverage of the Republican nominee, which did next to nothing to stop his momentum to the White House. The working class voters of the Rust Belt didn’t care about his taxes, his remarks about women, or his temperament. It was their moment to back the man who came into their communities, promised them jobs and job protection from trade deals, and finally sticking it to the urban-based elites who have viewed them with scorn and disgust for decades. They got that on November 8; the Trump rampage against one of the greatest allies the Left has when it comes to attacking Republicans was just the icing on the cake.