WSJ: Trump Might Keep Parts Of Obamacare In Place 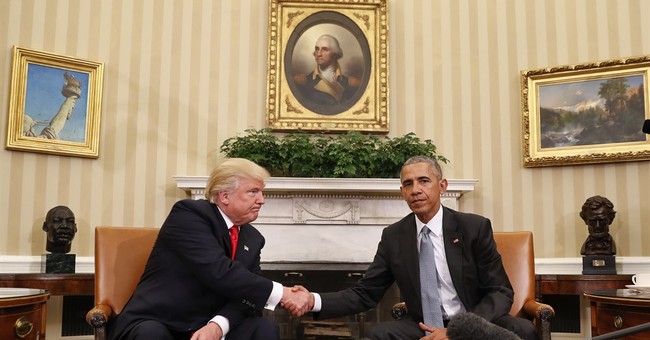 I know the headlines are suggesting that President-elect Donald J. Trump might be backpedaling on some policy issues, but some tweaks were expected as this is politics and you never get 100 percent of what you want. Right now, there’s some attention being given to Trump’s possible move to keep parts of Obamacare in place. At the same time, it’s only two areas where the president-elect said he might keep from the existing Affordable Care Act, according to The Wall Street Journal:

In his first interview since his election earlier this week, Mr. Trump said one priority was moving “quickly” on President Barack Obama’s signature health initiative, which Mr. Trump said has become so unworkable and expensive that “you can’t use it.”

Yet, Mr. Trump also showed a willingness to preserve at least two provisions of the law after Mr. Obama asked him to reconsider repealing it during their meeting at the White House on Thursday.

Mr. Trump said he favors keeping the prohibition against insurers denying coverage because of patients’ existing conditions, and a provision that allows parents to provide years of additional coverage for children on their insurance policies.

On health care, Mr. Trump said a big reason for his shift from his call for an all-out repeal was the meeting at the White House with Mr. Obama, who, he said, suggested areas of the Affordable Care Act, widely known as Obamacare, to preserve. “I told him I will look at his suggestions, and out of respect, I will do that,” Mr. Trump said in his Trump Tower office.

“Either Obamacare will be amended, or repealed and replaced,” Mr. Trump said.

Okay—so it’s still possible that the whole bill could be scrapped. At the same time, it’s a bit satisfying to see Obama groveling at Trump’s feet, pleading not to undercut his signature domestic achievement, which liberals now are seeing as incredibly fragile in the sense that it could be undone with just the signature of a new president working with a new Congress. Also, Trump isn’t totally lacking in self-awareness in this situation. If an outgoing president asks you to reconsider something, what's the harm of saying you might just do that, especially when you’re in front of the cameras in the Oval Office. It’s out of respect for the office. You don't tell the president to shove it. And what he said isn't necessarily a lie. Trump merely said he’d either amend it or repeal and replace it. He didn't promise Obama anything. He can easily turn the corner once he takes the oath of office.Either way, the meat of the law will be gone and that’s a win. For now, let’s not freak out too much over this. He’s not even president yet.