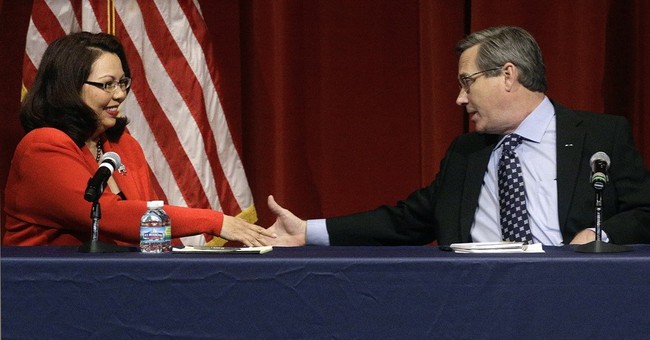 Justin delved into this last night, but let’s expound on that last remark Sen. Mark Kirk (R-IL) said to Democratic Rep. Tammy Duckworth, which was uncalled for, awkward, and provided for a rather ignominious end to his senate career.

Kirk took a swipe at Duckworth’s Thai heritage during the October 27 debate, which he later issued an apology. Still, if you’re going to lose, and Kirk will lose handily tonight, at least go down with some grace. Moreover, Kirk has very little ground to stand on regarding military credentials since he pretty much lied about his background (via NPR):

My family has served this nation in uniform, going back to the Revolution. I'm a daughter of the American Revolution. I've bled for this nation. But I still want to be there in the Senate when the drums of war sound," Duckworth said. "Because people are quick to sound the drums of war, and I want to be there to say this is what it costs, this is what you're asking us to do. ... Families like mine are the ones that bleed first."

Kirk, given 30 seconds to respond, was curt, answering only: "I'd forgotten that your parents came all the way from Thailand to serve George Washington." The moderator then moved on to the next question.

The remark was flippant and racially charged but also incorrect. Duckworth was born in Thailand to a Thai mother of Chinese heritage and an American father who was a U.S. Marine.

Democrats immediately pounced and demanded an apology from Kirk, noting that his own history of military service has been under question. On his campaign website earlier this year, Kirk falsely said he was a "veteran of the Iraq war," when in fact he was in the Navy Reserves and remained stateside.

Kirk was probably the first race this cycle that the GOP could’ve written off. It’s in deep-blue Illinois, Tammy Duckworth is a pretty well known Democrat, she a war veteran who lost both of her legs in Iraq, and, again, this is deep-blue Illinois. Still, the Kirk campaign is wrapping things up in the Cook County suburbs, where elections are decided in the state (via Chicago Tribune):

Duckworth, a two-term congresswoman from Hoffman Estates, traveled the Chicago area from south to north, including getting a hair cut, shampoo and blow dry at a hair salon in the Avalon Park neighborhood on the South Side.

"I'm confident that we're on a path to victory Tuesday, but we're not taking anything for granted," she said from the stylist's chair. "Hopefully it all comes together and we celebrate Tuesday night."

Later, she ventured to Gurnee and the headquarters of the Lake County Federation of Teachers Local 504.

"You are my legs, walking the doors for me, which is something I literally cannot do," Duckworth said, a reference to the loss of her legs after her U.S. Army helicopter was shot down in the Iraq.

Kirk visited a GOP campaign office in the suburban swing territory of Des Plaines, speaking briefly to a crowd of campaign workers before leading the group in a rendition of "Go Cubs Go."

"If the Cubs can win the World Series, then the Republicans can definitely sweep this year in Illinois," Kirk said.

The Republican acknowledged the long odds his campaign faces where Democrats up and down the ticket are looking to benefit from higher turnout among their ranks in a presidential year. But he said his past successful campaigns are proof he has always "defied expectations."

"All Illinois races are also decided in the Cook County suburbs, which is why we're finishing up the campaign right here in Des Plaines," Kirk said.

Ohio and Illinois should be some of the first senate races to be called immediately, though GOP chances are much better in the Buckeye State, where Republican Sen. Rob Portman is expected to win re-election in a landslide against former Democratic Gov. Ted Strickland.