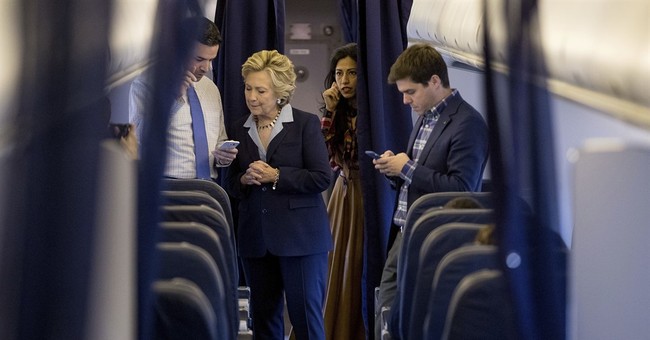 The FBI review of some 650,000 Clinton-related emails found on Anthony Weiner’s laptop has begun; the laptop was shared by him and his estranged wife, Huma Abedin, who is also Clinton’s campaign vice chair and top aide. That led to the discovery of the emails, which prompted FBI Director James Comey to inform Congress that a review of these documents will occur. Needless to say, Democrats are not happy about this renewed probe, with some accusing Comey of influencing the election—though they seem to forget that it was Clinton’s fault that she decided to establish an unauthorized and unsecure email server that possibly endangered our national security when she was our top diplomat. With accusations flying, some of which accuse Comey of being on the side of Russia, while others argue that he was forced into making a tough decision thanks to Clinton’s irresponsible actions, and the Democrats’ decision to nominate her for president while under a criminal investigation over her server, there are new details from the initial investigation.

Don’t get me wrong; the notion that Comey is pro-Russian is absurd. And there is zero evidence, as Senator (and professional troll) Harry Reid (D-NV) alleges, that the FBI is sitting on information pointing to Donald Trump having ties to the Russian government. Yet, Politico did find a source that told them that the FBI didn’t require staffers who worked for Clinton while she was secretary of state to turn over all of their devices:

The FBI never asked Hillary Clinton's top aides to turn over all the computers and smartphones they used while Clinton was secretary of state, an omission that is now triggering questions from Republican lawmakers.

While the FBI made a concerted effort to obtain all the computers that were used as Clinton's private server and ultimately asked two of Clinton's lawyers for laptops used to review her email messages, investigators never requested or demanded all equipment her top staffers used for work purposes during her four years at State, a source familiar with the investigation told POLITICO.

No one was asked for devices by the FBI," said the source, who requested anonymity.

The decision left the FBI at least partially dependent on the aides' attorneys' decisions about which messages were work-related and therefore might have contained classified information the agents were looking for. Those messages were turned over to State in response to its request last year.

GOP lawmakers say the decision not to demand the aides' electronics, or even to ask for them, raises doubts about how the FBI and prosecutors handled the probe.

Sen. Chuck Grassley (R-IA), who serves as the chairman for the Senate Judiciary Committee, sent a letter to Comey about this aspect of the case:

“If the FBI is denied the ability to gather evidence through compulsory means, Secretary Clinton and her aides have enormous leverage to negotiate extraordinary concessions in exchange for voluntary cooperation. This has already happened in the course of this investigation. For example, my staff has reviewed the agreements whereby the Justice Department agreed to limit its search of laptops from two of her senior aides to an extremely narrow scope and then destroy the laptops when the search was complete. The scope of the agreed-upon search was so narrow that it prevented review of emails during a time period in which the aides may have engaged in deleting emails relevant to investigations being conducted.”

At the same time, he did rip Comey for his letter, calling his announcement of a new review of Abedin’s emails lacking sufficient details to the point where it wasn’t “fair to Congress, the American people, or Secretary Clinton.”

Anthony Weiner is under investigation for online interactions he had with an underage girl, which led to the bureau stumbling upon these Clinton-related emails. The review of these documents could take weeks. Politico added that one reason why the FBI didn’t ask for all the devices used by Clinton’s aides was because their investigation was focused on the server. You’ll be the judge on this nugget, which again, is through an anonymous source.