Clinton: What the FBI Is Doing Is ‘Unprecedented’ And ‘Deeply Troubling’ … So Was Your Private Server, Hillary 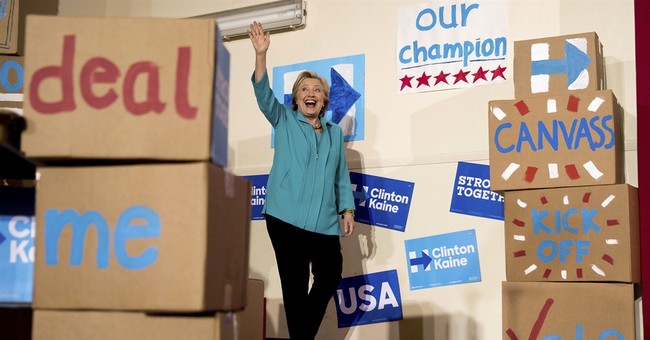 At a rally in Daytona Beach, Florida, Hillary Clinton tore into the FBI’s bombshell announcement yesterday that they’re going to look into some more emails found on Anthony Wiener’s laptop, which was shared by Huma Abedin. Weiner is under investigation for his online interactions with an underage girl. He and Huma are separated, but that sharing of a device meant that Abedin, a top aide for Clinton, sent emails to the former first lady making them pertinent to their initial probe that concluded in July.

On Friday, FBI Director James Comey sent a letter to Congress informing them that they’re going to look at these emails. There are thousands of them. The Clinton camp has cried foul over the development so close to Election Day, though their apoplectic state shows that at last the Hillary campaign realizes that her email trip up is a big deal, even if it is solely based on polling; Clinton’s trust and honesty numbers have tanked since The New York Times broke the story in March of 2015.

.@HillaryClinton calls FBI letter ahead of election "not just strange," but "unprecedented and deeply troubling" https://t.co/GuohtbycQa

“It is pretty strange to put something like that out, with such little information, right before an election. In fact, it’s not just strange; it’s unprecedented and it is deeply troubling because voters deserve to get full and complete facts,” Clinton said to die-hard supporters. “Put it all out on the table,” she added.

Oh, so Clinton is Mrs. Transparency now? We really didn’t get the full and complete facts about her email server, in which she deleted 30,000 emails, with 15,000 more emails were found by the FBI, 30 of which related to Benghazi. Now, out of that 30, just one new document turned out to be anything new on Benghazi, but the truth is that these emails weren’t turned over. Also, Clinton’s entire email arrangement was unprecedented. She said she got approval from the State Department and that this was allowed. It wasn’t. And if she had gone to State officials about it, they would never have signed off on it. Another thing that’s unprecedented this election cycle is having a presidential candidate be nominated by a major part while under FBI investigation for possibly mishandling classified information.

From boos and jeers heard when Clinton referenced the FBI at this rally, it shows that Democrats rally have no self-awareness at all. They’re not going to leave Clinton, who acknowledged last night that voters have already made up their minds about her email fiasco. Of course, this is all unprecedented—and Comey seems to be the one setting new precedent should we have another candidate down the road who gets placed under the microscope by federal authorities during an election. Clinton wants voters to have the full and complete facts on the table. What a joke. Then again, she and the Democrats have their own set of rules. At least we see some authentic emotion from Clinton with this news: anger.