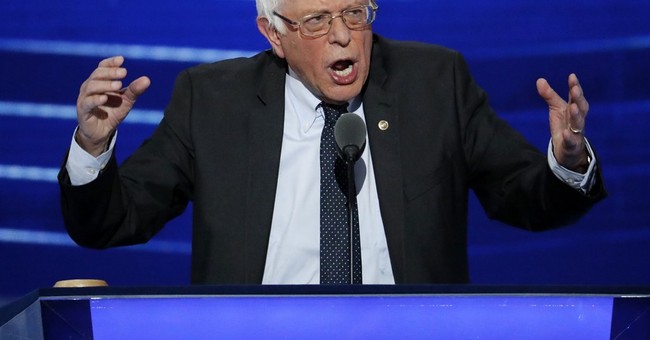 With Wikileaks and Trump’s allegations of sexual misconduct dominating the headlines, though the latter has taken a stronger hold, there was also some discussion about Election Day spoilers—specifically the strong showing Independent candidate Evan McMullin is having in Utah. In a recent poll, Utah had Donald Trump and Hillary Clinton tied at 26 percent; McMullin came in at a strong third with 22 percent. FiveThirtyEight entertained a scenario where McMullin could win the White House, claiming Utah’s electoral votes, force a vote in the House due to no one being able to win 270 in the Electoral College, and bank on the defections from Republicans to clinch the presidency. It’s a highly unlikely outcome. In fact, it should be regarded as more of a conservation starter/thought exercise rather than something that’s actually grounded in reality. But then there’s Sen. Bernie Sanders (I-VT). Clinton’s former primary challenger could win Vermont’s three electoral votes (via McClatchy):

Bernie Sanders doesn’t want to be president, but he could snatch three electoral votes in Vermont.

That’s because Vermont is one of seven states that allow voters to write in anyone for president, even if they have no intention of running for office.

Hillary Clinton and Donald Trump are two of the most disliked presidential candidates ever, and Google searches for write-in ballots are skyrocketing.

Vermont is one of the states asking Google about write-in votes the most. A write-in vote for Sanders in Vermont would be treated like a vote for Trump or Clinton.

Only Vermont, Pennsylvania, New Hampshire, New Jersey, Rhode Island, Iowa and Oregon allow voters to write in anyone for president.

It’s an interesting map if McMullin and Sanders could take away these votes from Clinton and Trump. Even with Clinton winning all of Maine’s electoral votes (two awarded the statewide winner, with two other awarded by congressional district) and three of Nebraska’s five votes (two go to statewide winner, three are awarded by congressional district), the former first lady is short by one vote; Trump is short by ten in a 269-260 split. Let’s say Nebraska splits 3-2 Trump. Clinton is still short of 270, 268-261. If Trump sweeps all of Maine and Nebraska (remember, if), he’s short 267-262. Clinton would have to sweep Nebraska, which isn’t going to happen, to get 270. It’s certainly interesting, but this map, like the McMullin scenario, is also predicated on some factors, some of which might be a stretch for Trump in the wake of these sexual misconduct allegations.

Trump has to win New Hampshire, Ohio, Florida, Iowa, and North Carolina—all states that Clinton could win handily on Election Day (especially in New Hampshire). Now, Trump could be in trouble in Arizona. I’m still banking on Trump pulling through in Utah and Arizona, but even if he wins the rest of the toss-ups (Ohio, Iowa, and Florida), Clinton still wins. Now, if he does manage to win New Hampshire, with Clinton taking Clinton Vermont, we’re at a 269-269 tie*.

*In this scenario, Clinton takes all of Maine and Trump sweeps Nebraska.